A View To A Will

James Bond actor Daniel Craig has said in an interview with Candis Magazine he won’t be ‘leaving great sums’ to his children because he finds inheritance ‘distasteful’. And he’s not the first rich celebrity to make this claim – both Gordon Ramsey and Elton John have expressed similar sentiments in recent years.

But are Craig’s comments completely out of touch with us everyday people? While some people cashed in thanks to the pandemic-induced stamp duty holiday, it is still a struggle for young people to get on the first rung of the housing ladder. As of May 2021, thanks to a 10% increase in house prices, first-time buyers now need about £25,000 more to buy a house than they needed just 12 months ago. This is something that is just wildly beyond the reach of most first-time buyers, without a financial leg up from the Bank of Mum and Dad.

Craig has always enjoyed a comfortable life, even before his fame, and was able to attend well-respected and established schools in the north of England. He had a successful and lucrative career as an actor before landing the role of James Bond in 2005, which shot him to superstardom and has seen him cash in an estimated $84million over the past 16 years. Now married to fellow A-lister and Oscar winner Rachel Weisz, who herself is worth an estimated $36million, it’s safe to say that their children will want for nothing.

Bond is shaken, not stirred

So, is Bond right to get so shaken about inheritance? After all, he has worked hard to get to where he is and earn the money he has – should his children be able to live the rest of their lives off the back of their parents’ hard work? Or should they be stirred to forge their own careers?

Many other celebrities have talked about the desire to raise their children as normally as possible. Everyone from the Duke and Duchess of Cambridge to the Beckhams’, have insisted upon as much privacy as possible for their children, so they can experience a normal childhood – is this counterproductive if they are then eventually handed a golden ticket?

Chef Gordon Ramsey has taken this move one step further, stating that none of his five children will be left anything in his will, as he doesn’t want to ‘spoil’ them and prefers to see his money going to charity. This is a sentiment that Craig seems to agree with, having also commented that he admires the example set by other multi-millionaires before him: ‘I think Andrew Carnegie gave away what in today’s money would be $11billion, which shows how rich he was because I’ll bet he kept some of it too.’

So while we can applaud celebrities for insisting their kids stand on their own two feet or supporting charities instead of their children, it’s important to remember that their children are still hugely privileged and not ‘just like us’.

From the best schools to the best network and the indefinable value of a famous name or connection, it’s unlikely that any of these children will struggle for work or to get on the property ladder.

But those of us without a famous mum or dad probably will. According to the Office for National Statistics (ONS), people in their mid-30s to mid-40s are three times more likely to rent today than 20 years ago, thanks to two economic recessions, rising house prices and a stagnation in salaries.

So what if the Baby Boomer Generation decided to take a leaf out of the celebs book and leave everything to the local cats home, or blow it all on a succession of Caribbean cruises?

If that was the case, it’s likely that the average buying age would spike.

With the price of living rising and salary inflation lagging behind, this is a sum that is almost completely unattainable for most people in their 20s, without significant financial support. 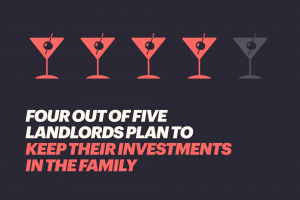 But should Baby Boomers support?

Well, yes. While Baby Boomers may claim they had it just as hard as Millennials and Gen Z do today, the fact remains that Baby Boomers benefited from free education, stable jobs in thriving industries and affordable homes.

In 1966 the prices were very different :

That’s not accounting for two economic recessions in the last twenty years, as well as crippling student debt and a rising cost of living.

While celebrities like Craig and Ramsey have the luxury of considering inheritance distasteful, it’s not something most of us can look down our noses at. If older generations want to make sure that their children are financially secure, it looks like the Bank of Mum and Dad is here to stay.

While Daniel Craig has the philanthropic desire to follow in the footsteps of Andrew Carnegie, for Baby Boomers and Millennials – charity will have to start at home.