Who Pays for a TV Licence: Landlords or Tenants?

We all love a good binge-watching session, but once you have finally completed Netflix, where do you turn?

Why, you go to Amazon Prime, YouTube, Rakuten and AppleTV, to name a few. But did you know that once you watch actual TV or stream on an app like BBC iPlayer, you will need to pay a TV licence?

That’s right; you’ll need a TV licence to watch the good ol’ telly box. And if you’re renting your home, you’re probably wondering who pays it: you or the landlord?

We’ve put this guide together to answer the all-important question of who pays for the TV licence, as well as other tidbits you’ll probably want to know about the world of TV licencing. So, read on and find out everything there is to know about TV licences.

What is a TV licence?

In short, a TV licence allows you to watch or record live TV programmes on any channel, covers you to download or watch BBC programmes on iPlayer and lets you watch or stream programmes live on online TV services, such as All4 and YouTube.

You may even need a TV licence even if you don’t have a TV. Any device that you use to watch or stream live TV programmes, or download from BBC iPlayer, requires you to have a licence by law. These include:

Simply put, if you want to watch or stream TV programmes, no matter what device you’re using, get yourself a TV licence. 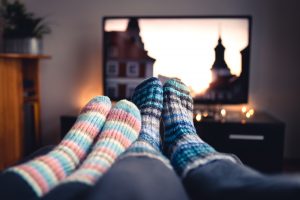 Who pays for the TV licence?

Unless the landlord specifically states in the contract that the TV licence is included in the rent, then it is the tenant’s responsibility to pay. This payment can obviously be split between tenants if you are in a shared rental, which will cut down the amount each individual has to pay.

How much does a TV licence cost?

As of April 2020, a standard colour TV licence, the cost is £157.50 per year. While this sounds like a big chunk to take out of your bank account all at once, there are options to split payments, ranging from monthly costs of around £13 to quarterly payments of around £40.

Are there any exemptions for TV licences?

There are very few discounts and exemptions available if you need a TV licence. If you’re aged 75 or over and receive Pension Credit, then you are exempt from paying for a licence. People who are blind or live in qualifying residential care also qualify for an exemption.

Is a TV licence mandatory?

In most cases, you will need a TV licence. Exception include:

If this is all you do, then you won’t need to pay for a TV licence free.

Now that you’re all up to date on everything TV licence related, you can ensure that you avoid any of those pesky TV licence letters (the fine for not having one can be as much as £1,000!).

Just remember to check the AST before singing to see whether it’s yours or the landlord’s responsibility to pay for the TV licence.