As the scent of roses and chocolate fills the air this Valentine’s Day, one of the best ways to get into the mood for love is to watch a feel good romantic film.

However, with London seeing the lowest level of house price growth of all regions in the UK, homeowners across the capital could be forgiven for not feeling the love this Wednesday.

As a result, we looked at some of top British romantic flicks set in London and how the leading stars from a bricks and mortar perspective have fared for price growth since the films first hit the screens.

Flat in the Royal Borough of Kensington and Chelsea
Current House Price: £1,102,761
Increase Since Release Date: 328% 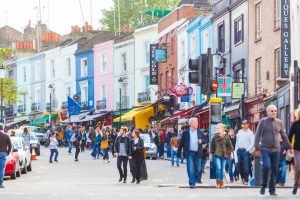 Topping the list for largest increase by a long shot is Hugh Grant’s cosy flat off Portobello Road in Notting Hill with a 328% jump since the film’s release in 1999.The film’s success likely helped the area transform into a favourite tourist destination in London, with the average property price for a flat climbing from £257,669 at the release date to £1,102,761 today.

Hugh Grant makes another appearance on the roster with his modest flat in North London. Since the release of Four Weddings and a Funeral in 1994, the price of flats in Islington have jumped by 277% from £163,114 to £614,663. Although this neighbourhood in N5 didn’t develop into a tourist hub in the same way that Notting Hill did, property values in Islington have still enjoyed major increases in the nearly 25 years since the film’s release

It would seem that any film featuring Hugh Grant is bound to enjoy excessive increases in property value. Keeping with this theme, the price of Renée Zellweger’s flat in Borough from Bridget Jones’s Diary could have seen a growth of 227% since the release date in April 2001. The value of flats in Southwark have increased from £317,723 to £457,461 over the 17 year period.

Prices in Maida Vale have risen on a lower scale with a shorter timeline than some of the other films that are featured. However, the average price for a semi-detached home in the City of Westminster will set you back £2,399,913 today, up 23% from £1,946,907 in August 2013 when the film was released. Aside from Maida Vale, Rachel McAdams’ character lives in a flat in Notting Hill, which would have only seen a 7% increase in the five year period.