If you’re running the country, you don’t usually go home to an average three-bedroom semi in the suburbs. Instead, you’re more likely to retreat to an opulent mansion that would quite literally take your breath away.

How much for the keys to one of these ministerial mansions?

There is no denying that these palatial properties come at an eye wateringly high cost (and we’ve crunched the numbers to prove it). Taking 20 ministerial mansions that the world’s most powerful leaders call home, the property valuation experts here at Mashroom have calculated how much they would list them for.

From Trump Tower through to 10 Downing Street, discover just how much you’d have to spend to live the life of a world leader. 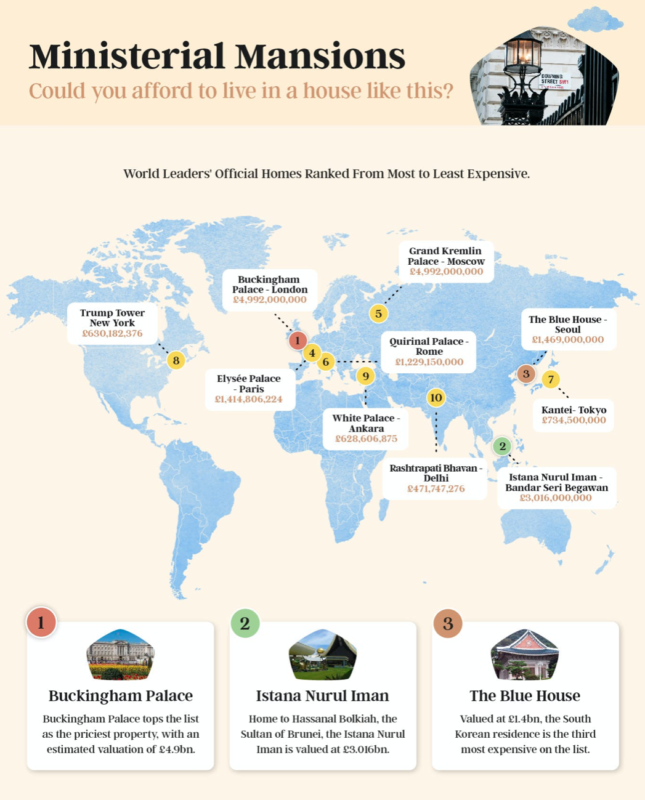 Buckingham Palace tops the list as the priciest property at £4.9bn, followed by Istana Nurul Iman which is the official residence of Hassanal Bolkiah, the Sultan of Brunei which would be worth £3.01bn on the market today.

Calculating the cost per square metre, we estimate that the overall floor plan of Buckingham Palace is around 77,000m², which makes the cost per metre square a staggering £64,831. That’s almost 5000% more than the average price per square metre in Central London, which comes in at £11,523.

However, the £3bn Istana Nurul Iman residence is much better value for money. At 204,387m², it’s almost three times as big as Buckingham Palace and that results in a much lower price per square metre; £14,756. 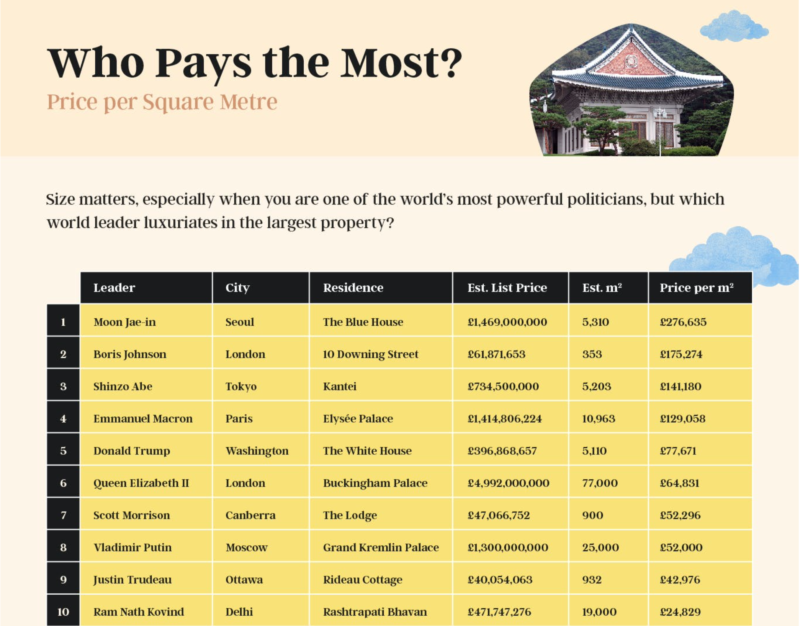 Compared to the average cost per square metre in each city[1], we’ve found the properties that have the biggest difference in land value, compared to what you’d usually expect in each city.

How much for a ministerial mortgage?

World leaders can enjoy their properties without having to worry about mortgage payments, and other bills. But what if they did?

Based on the estimated valuation assigned to each property, we’ve calculated the average monthly mortgage payment, based on a 20 year fixed rate, with an assumed 20% deposit.

Got 8 million in the bank…?

…then you could be in the market for a ministerial mansion.

Based on the average total cost of the 20 residences in the study, we calculate that you’d need to have at least £809m in the bank to be able to buy a home worthy of a world leader, with the price per metre square averaging £52k across the board.

We calculated the land value of a ministerial mansion to be almost 10 times more than the average price per square metre in each of the 20 cities in the study which comes in at £5,016 per square metre.

Ankara the capital of Turkey has the highest mortgage interest rate in the list at 16.37%[2]. The calculated monthly mortgage payment on President Erdogan’s White Palace residence would be £7,136,387[3] which works out at more than 18,000 times more than the average monthly salary[4] in Turkey (£375.93).

Which world leaders could buy their residence out right?

Taking the reported net worth* of each leader in the list and comparing it to the list price of each of their residences we can reveal that just six of the 20 leaders in the study could afford to purchase their property out right. 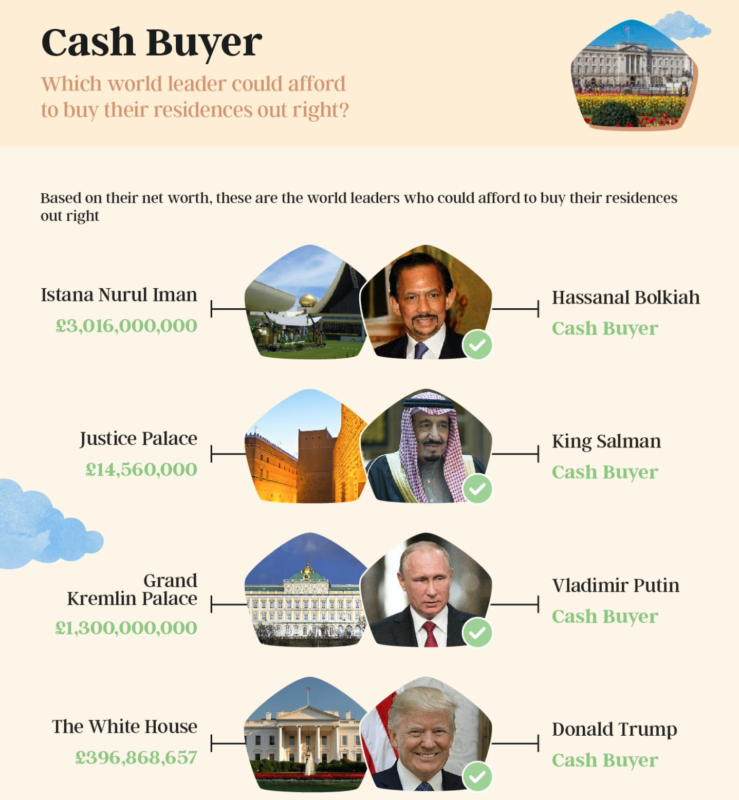 King Salman bin Abdulaziz Al Saud of Saudi Arabia could buy Justice Palace 893 times over with his estimated net worth of £13bn. Back over in Europe, Angela Merkel could put down all of the cash for the Chancellery, with her net worth estimated at £8.7million.

Boris Johnson would have to take out a hefty mortgage to afford Number 10. With an estimated list price of £61.8m, the Prime Minister would need to increase his estimated net worth more than 40 times before they could hand the keys over.