How Your Neighbours Can Help Sell Your House  

You’ve spruced up the kitchen, made the bathroom into a Zen-like spa. You’ve even given the front door a lick of paint and tidied up the front garden. You’ve done everything right so why are potential buyers refusing to even step over your threshold?

As people arrive for viewings they aren’t just looking at your house but getting their first impressions of the neighbourhood. No-one wants to live next to a neighbour whose idea of exterior up-keep is an old mattress and a pile of burning tires. Although, thankfully, neighbours’ property neglect isn’t usually that extreme, you’ll be surprised by how much next door’s appearance can help or hinder the sale of your house.

Viewers will make assumptions on the whole neighbourhood

Borrowing an egg from time to time and having friendly chats over the hedge good neighbours can make your home that much nicer, but who knew they would also be important when the time came to sell.

A recent survey of over 2,000 adults, from findaproperty.com, showed how important good neighbours are when it comes to selling your house. 40% of people reported they would be willing to pay more for a house, if it came with quiet and trustworthy neighbours.

Viewers will make immediate assumptions on the quality of the people next door and the whole neighbourhood, based on the outside of their houses as much as yours. 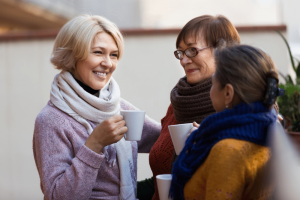 Well kept neighbouring properties will add value to your house

You’ve just finished attending to the curb appeal of your house, when you look up and notice the overgrown, paint-peeling horrors on either side.

A recent survey found that 88% of estate agents agreed that a well-kept property next door would increase the value of a property. They estimated an average 12% increase, which equates to an impressive £19,400 at current housing prices. I bet you’re interested now.

The opposite is also true. Almost all estate agents surveyed agreed that an unkempt neighbour’s property would have a negative effect on the value of your house.

Work together to make the neighbourhood attractive

Whether you’re on the best of terms or only catch glimpses of each other in the mornings, the topic needs to be tackled with diplomacy. If they aren’t selling their house it’s likely they haven’t noticed that their exterior needs attention. Approach them with a letter or a polite visit and explain the situation. Offering to do the work yourself will often make people more amenable to the idea.

Make sure that you don’t sound accusatory, rather that it’s in everyone’s interest to keep the neighbourhood house prices up. If you’re worried about approaching people individually you could try organising a street meeting. Getting enough people involved could have an amazing impact on the appearance of the whole street.

Beware of any complaints

Tenants who live in council owned houses have a responsibility to keep the house and outdoors in a respectable condition. Although this may seem like a good route for some unreasonable neighbours, who are having a negative impact on your sale, be aware that any disputes with the neighbours must legally be declared.

If you complain in writing or report them to an authority this has to be recorded on the Seller’s Property Information Form, or risk being sued by the buyer. Try to communicate problems in a reasonable and tactful manner, considering others’ feelings. Hopefully you’ll find most people will be reasonable, and prove that your neighbours can be extremely helpful to the sale.

How does a neighbourhood hold property value?

Neighbourhoods are a track record of rising home prices

Buying a home that declines sharply in property value can put you underwater on your mortgage, erode your net worth and leave you unable to relocate for a new job or adapt to a change in household income. And one of the biggest factors that determines whether a home will rise or fall in value is its neighbourhood.

Buying a home that declines sharply in property value can put you underwater on your mortgage, erode your net worth and leave you unable to relocate for a new job or adapt to a change in household income. And one of the biggest factors that determines whether a home will rise or fall in value is its neighbourhood.

That’s actually a good thing, because you don’t need a crystal ball to evaluate a neighbourhood’s direction.

The single most important determinate of real estate prices in a n area is employment opportunity nearby. Without that, a neighbourhood is at risk of taking a free fall in real estate values. There are a few telltale signs of areas with long-term opportunities for jobs:

• Seats of federal or state government

• Large or prominent colleges and universities

A wealth of desirable amenities

Having desirable amenities within the neighbourhood is a second major factor in whether a neighbourhood will appreciate or decline in property value.

Examples of key amenities that can add value to a neighbourhood:

• A variety of retail stores

Features that stand out from surrounding areas

Neighbourhoods that protect homeowners’ values the most are those that combine good job opportunities and amenities in ways that are unusual for the area. For instance, if you live in or around a metropolitan with poor schools overall, buying in a neighbourhood that has good schools can keep your property values high even as the surrounding area falls.