The Waitrose Effect: A Waitrose Supermarket Can Double Your Property Price

Leading online estate agent, Mashroom, has released research into the Waitrose effect on house prices surrounding each of the supermarket’s 300+ UK stores.

Mashroom’s research found property surrounding Waitrose stores costs £456,000 on average, more than double that of the UK overall (£221,254), having increased 7% over the last year.

It’s well known that the close proximity of a house to sought-after amenities can help increase a property’s price potential. Previous research by Mashroom found that a mainstream supermarket, such as Waitrose, was the second most important amenity to UK buyers (30%) – beaten only by the British corner shop. 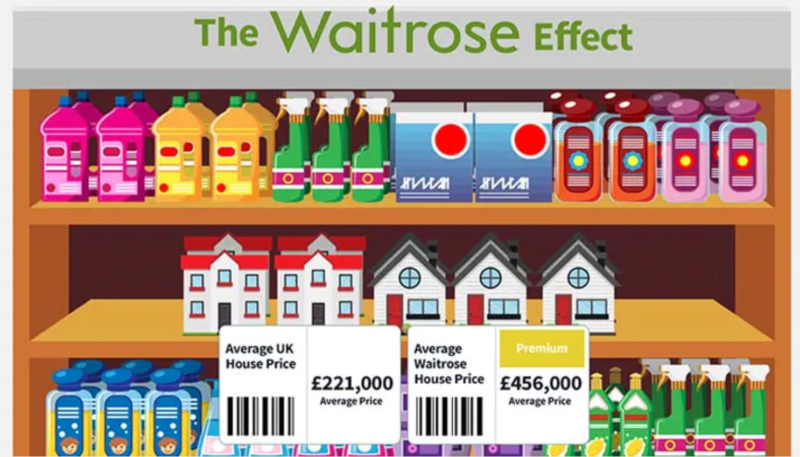 The allure of a Waitrose is clearly more appealing to Britain’s upper class than a discount store such as Aldi, with one resident of Poynton in Cheshire quoted last week saying “I thought we were making real progress as a community with the opening of Waitrose in 2012, however with the opening of Aldi I feel as though we are taking a step back into the lower class.”

But how beneficial is the presence of a Waitrose store to the surrounding areas and does its middle to upper-class image rub off on property prices?

Emoov’s research found property surrounding Waitrose stores costs £456,000 on average, more than double the UK average of £221,254. The most expensive? Where else but Kensington in Chelsea, where the average property around the Waitrose store will set you back nearly £2.6m.

But it isn’t just London’s prestigious areas that are benefiting from the Waitrose effect. Property around the Waitrose in Upminster has seen a value increase of 10% in the last year, with the Upminster market overall only enjoying a 3% increase. In Dorchester, Waitrose property prices have also increased by 10% in the last year, despite the local market only increasing by 4%.

The local property market in Sandbach has actually seen values drop by -2% over the course of the year however property values surrounding the Sandbach Waitrose are up 4% in the same timeframe.

The property surrounding the Waitrose supermarket in Wolverhampton has the lowest average house price across all UK stores at £118,000. However, over the last year prices in the area have increased by 9% in value, compared to just 6% in Wolverhampton as a whole.

These are just a handful of 64 locations, where Waitrose property has seen a bigger value increase in the last year, when compared to the local market as a whole.

“In a market as competitive as the UK’s, savvy home sellers will use any bargaining chip they can to justify a higher asking price and, close proximity to a desirable amenity, will always act as such a chip.

Although Waitrose positions their stores in more affluent areas, it is clear that the presence of a Waitrose supermarket can influence surrounding property values in a positive manner and in many cases, can see homeowners double the price potential of their property.

Waitrose is a bi-word for ‘well to do’ and therefore for those that place a high importance on such an image, a walk to the local Waitrose justifies a higher asking price to similar nearby properties.”