How Far Have We Come Since Grenfell?

Tomorrow is the fifth anniversary of the Grenfell fire, but are high rises any safer today than they were then?

On 14th June 2017, 72 people died in a fire in the Grenfell Tower high rise in North Kensington, West London. A further 74 people suffered non-fatal injuries, 20 of which were seriously injured, while 223 people were able to escape. The victims included young children and many people lost multiple family members.

It was the worst residential fire in the UK since the Second World War.

What caused the Grenfell fire?

Built in the mid-1970s, the 24-storey Grenfell Tower was originally made of 120 one- and two-bedroom flats, with the lower levels used for non-residential purposes. Two of the lower levels were later converted into flats, bringing the total number of flats to 129, housing up to 600 people.

The cladding was designed to improve heating and energy efficiency, as well as improve the exterior look of the building. The aluminium composite material was a cheaper alternative, a more expensive material which would have been more fire resistant was rejected due to cost.

The tower also didn’t have any sprinklers, like many tower blocks in the UK.

Many tower blocks in the UK have a ‘stay put’ policy in the event of a fire, the idea being that thick walls and fire doors would contain the fire long enough for it to be brought under control.

This would mean a full evacuation would never be necessary and the building was designed with this in mind – with no centrally activated fire alarm and only a single central staircase.

However, residents of Grenfell Tower had flagged the danger of this over many years before the fire. 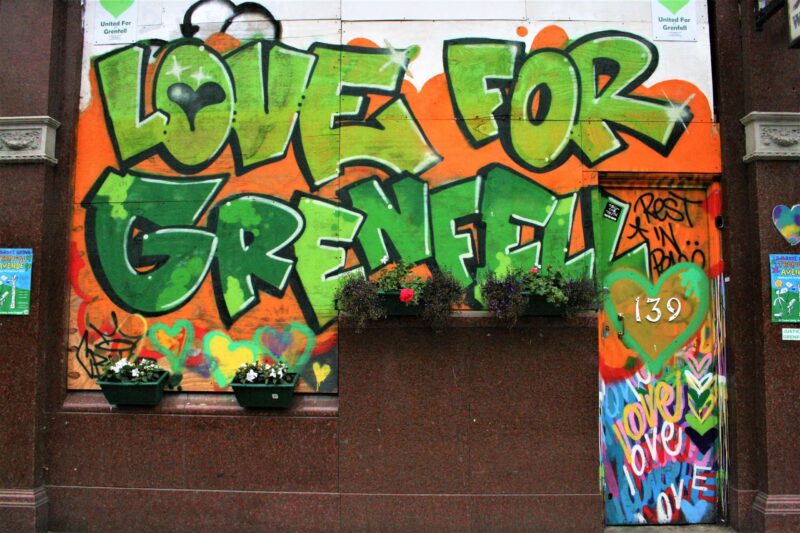 Residents had been voicing their concerns about the safety of the building for several years before the fire, even writing a blog because their complaints were being ignored.

Residents were so worried, they started the Grenfell Action Group, which warned that people could be trapped if a fire broke out. Just one year before the fire, in June 2016, an independent assessor found 40 serious issues with fire safety at Grenfell and recommended that they be fixed within weeks. This was not done.

Residents Mariem Elgwahry and Nadia Choucair but were threatened with legal action for their campaigning. Both would die in the fire, at the age of 27 and 33.

The night of the fire

The fire broke out just before 1am on 14th June 2017, caused by a faulty fridge-freezer (this was confirmed on 23rd June 2017). Residents had previously complained about power surges and such a surge could have set the fridge-freezer on fire.

Experts believe that the new cladding was possibly responsible for the rapid spread of the fire, police having found that the aluminium-polyethylene cladding and the PIR insulation plates used on the exterior of the building failed fire safety tests conducted after the fire. In 2014, safety experts warned that the insulation was only suitable for use with non-combustible cladding. It’s also thought that the gap between the cladding and the insulation worked ‘like a chimney’ on the night of the fire.

However, it appears that the combustible materials that were used on Grenfell Tower were significantly cheaper than non-combustible alternatives and were chosen for this reason, due to intense budgetary restraints on the refurbishment in 2015-16.

It wasn’t long after the fire that people began questioning both the response of the emergency services and the fire safety of the building itself. Then Prime Minister Theresa May ordered an inquiry the day after the fire, which opened on 14th September 2017.

Phase 1 of the inquiry covered the events on the night of the fire and its findings were published on 30th October 2019, with 46 recommendations, including:

Phase 2 of the inquiry is ongoing, having been delayed by the pandemic, and is looking into the response of the emergency services and how residents were treated, as well as:

But in the 5 years since the tragedy, are there still buildings in the UK at the same risk?

The short answer is, sadly, yes. There are over 100 buildings in the UK which still have cladding similar to Grenfell Tower.

Many homeowners with properties in similar buildings were worried that they might have to cover the costs of replacing dangerous cladding. However, in January 2022, Michael Gove wrote to those responsible for the cladding crisis, stating that they were being ‘put on notice’ and pledged that leaseholders living in smaller developments will no longer have to pay to fix these issues.

For those that invested in properties before the Grenfell fire – either for their own residential purposes or to rent out – not knowing about the risks inherent in the external cladding, it has been a stressful time and the end is not yet in sight.

Labour MP Hilary Benn is in support of all buy-to-let landlords being included in schemes to financially support those who own properties that are at-risk. While it may seem unfair to include those who own multiple properties and could afford to cover their own costs, the most important thing is to end the cladding crisis so that no further lives are put at risk.

What should we learn from Grenfell?

One of the biggest lessons that landlords should take away from the Grenfell Tower fire is how important it is to listen to your tenants.

There are rules and regulations in place for a reason – to ensure that tenants have a safe and comfortable home. No matter the size of your portfolio, you should follow all the safety requirements, to ensure your tenants safety:

From concerns about the evacuation policy and out-of-date fire extinguishers to complaints about electrical surges and blocked corridors, there were multiple opportunities to avert a catastrophe.

The sad truth of Grenfell is that while there were multiple failings that led to the fire, had the residents of Grenfell Tower been listened to and their concerns acted upon, this tragedy may never have happened.