Could a downstairs bathroom wipe value off of your property?

When selling a home, your main aim is to maximise value wherever you can. But you’ll also need to be aware of certain features that could wipe thousands from the value of your home.

According to new research from Direct Line Home Insurance, having a family bathroom downstairs could wipe more than £13,500 off the value of the average property. In London, the effect is even more stark, with a loss in value of up to £27,000 for a home with a downstairs family bathroom as opposed to one upstairs.

The data found that Brits would much rather have their bathroom upstairs, with 44% of UK adults stating that a downstairs bathroom would put them off purchasing a home. The presence of a downstairs bathroom has reportedly helped to put the brakes on a significant number of property sales in recent years.

This could explain why homeowners are increasingly choosing to move their bathrooms upstairs, with the research also revealing that 45% of estate agents are now reporting fewer properties with downstairs bathrooms listed on the market that was the case five years ago.

Given their unpopularity and apparent downward pull on house prices, it’s perhaps little surprise that homeowners are advised to move their downstairs bathroom upstairs before they sell, thereby improving the chances of a successful sale.

While this might cost in the short-term – with the work and hassle involved in relocating a bathroom from one part of the house to another – you could gain in the long-term with a bigger offer from prospective buyers. What’s more, they are less likely to be put off your home if they see an upstairs rather than downstairs bathroom.

If you’re looking to add value to your home before listing and were considering an extra bathroom downstairs to make this so, you may want to think again given how undesirable the above research suggests they are.

Adding an extra bedroom will typically add more value than an extra bathroom anyway, so this may be the route you want to take instead. Spare rooms – those oft-neglected places which easily fill up with junk or unwanted items – can be turned into an extra bedroom with the minimum of fuss and fairly low costs. Even better, they could help to boost the overall value of your home when you come to sell.

It’s important to remember that some people will appreciate a bathroom downstairs, particularly elderly people or those with mobility issues or certain disabilities. Equally, families with young children may appreciate a downstairs bathroom, for ease of use, potty/toilet training and to reduce the need for regular trips up and down the stairs.

Typically, downstairs bathrooms are found in older properties and are usually accessed through the kitchen. There are still thousands of homes across the country which include this facility, and it will hold an appeal to some people.

On the other hand, there is a good chance you could put would-be buyers off. Plus the dramatic loss in value outlined above doesn’t make for good reading. 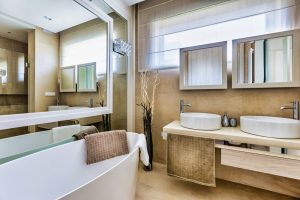 As ever, the findings revealed stark differences on a regional basis, with Londoners most likely to be put off by a downstairs bathroom. Some 57% of those in the capital said it would deter them from buying a home, while those in the North East (50%) and North West (also 50%) would also see it as a reason to look elsewhere.

Those living in Scotland, by contrast, don’t worry so much about the location of a family bathroom, with just 28% of buyers pointing to a downstairs bathroom as something that would actively discourage them. It’s also not a massive deterrent in the East of England, Wales or the South West.

Remember, wherever your bathroom is located, it’s likely to be a key selling point. And the quality of it will be all-important. Buyers now expect hotel-style, modern bathrooms with stylish décor, towel rails and a clean and crisp finish. Outdated and shabby fixtures and fittings will not go down well, neither will old-fashioned colour schemes or any features that are too out-there/quirky.

Carpet in the bathroom, too, is a major no-no. A popular trend in the 70s and 80s, perhaps, but definitely no longer the case now. If your bathroom has carpet, strip it out and replace with something more appropriate to contemporary living, such as vinyl, laminate or wood-effect flooring.