Where would Friends be set if it was in the UK?

Friends has been a cultural phenomenon since its launch back in 1994, a sitcom gem that is arguably just as popular today as it was when it first hit the screens.

Stretching across a decade, the show follows the lives of the six friends from their mid 20’s to their mid 30’s, through relationships, break ups, incredible jobs, becoming parents, some truly terrible fashion choices, but the one constant that always stuck around was the famous Friends apartment.

Monica’s enormous purple apartment was more iconic a character on the show as Marcel the capuchin, Hugsy the penguin, or – let’s face it, Ben.

But one of the long-running questions that have viewers scratching their heads, is how the friends could afford such a luxury apartment?

The apartment set in New York’s pricey West Village is estimated to be well over 1000 sq ft, and with two large bedrooms, a private bathroom, a balcony, and a huge kitchen – living room area.

This is not a cheap apartment.

It is briefly mentioned that they illegally sublet a rent-controlled lease from Monica’s grandmother. Meaning their rent was extremely low for the area they live.

The West Village is a trendy and fashionable neighbourhood, home to many designer boutiques and trendy restaurants. Quaint streets lined with townhouses, decorated with trees and punctuated with little squares and public gardens. The arty district is home to lots of unique bars and restaurants, piano bars and theatres nestled along some of the cobblestoned streets. 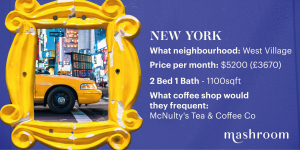 Monica’s apartment would cost around $5200 – $5700 a month if it was to be rented out today. If Central Perk wasn’t an option, the Friends gang would most likely grab a coffee at McNulty’s Tea & Coffee Co, a highly rated coffee shop just a block away from the famous apartment building.

Whilst the show was set in iconic New York City, it was actually filmed in a TV studio set in California.

So what if the series wasn’t set in New York, but somewhere in the UK?

Mashroom has collated a list of where Friends could be set in various cities around the UK. 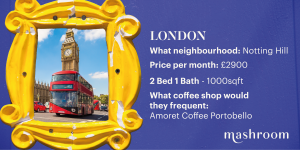 First for the UK would obviously be London. One of the four fashion week cities, to keep Rachel happy of course, a great theatre district in the West End for Joey, Ross would be right at home in the Natural History Museum, taking good care of Dippy (when he returns!)

It makes sense for the Friends to base themselves in vibrant Notting Hill. With the casual and trendy vibes, mixed with upscale boutiques, high-end restaurants and pastel-coloured houses, it would make a perfect base for Chandler and co to call their London home.

Rent in London would cost £2900 a month for a similar sized property, and with Amoret Coffee Portobello around the corner, it’s a perfect spot. 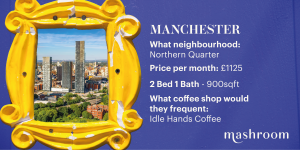 What if Friends was set in Manchester? If they wanted to head to this northern hub, there would be so much for them to do. The obvious place for Monica to place her apartment would be the Northern Quarter.

The bohemian bars, independent shops and vibrant street art make the Northern Quarter the place to be in Manchester. With live music venues, art galleries, Manchester Craft and Design Centre it is a perfect cultural hotspot in the heart of Manchester.

Rent in the Northern Quarter for a Monica sized apartment, would be around £1225 per calendar month. This is much more affordable than the New York version, leaving more spare change to spend at the nearby Idle Hands Coffee shop. 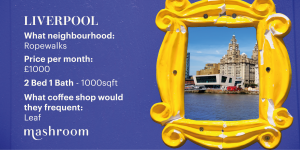 What if Friends was set in Liverpool? Seeing as New York’s Central Park was originally modelled on the local Birkenhead Park after American landscape architect Frederick Law Olmsted visited the park during a trip to Liverpool in 1850 and was inspired by its design, the Friends may feel right at home in Merseyside.

The Ropewalks area of the city centre sits a stone’s throw from the iconic river Mersey and is home to FACT independent cinema and gallery, the Bluecoat Arts Centre and the famous “Bombed Out” Church (St Lukes.) The creative and bohemian neighbourhood is bustling with vintage shops, cafes and several nightclubs and live music venues.

Rent in the Ropewalks area of Liverpool would be around £1000 for a 2-bed apartment. The local tea (and coffee) shop, Leaf, even has regular open mic nights for Phoebe to belt out Smelly Cat. 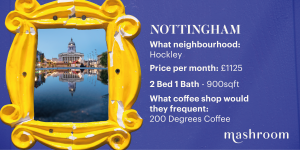 Nottingham City Centre’s Creative Quarter is a thriving part of the city, and whilst Nottingham may be on the small side, with a population of only 334,000, the Friends could certainly feel at home in neighbourhoods such as Hockley. Hockley is a quirky area packed with vintage clothing stores, record stores, book shops and tattoo parlours. You can find endless cocktail bars, quirky pubs and even arthouse films in this fun little neighbourhood.

A 2 bed to rent in Hockley would cost £900 a month, and it would be a great spot to frequent the 200 Degrees Coffee shop nearby. 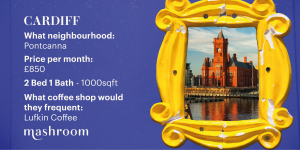 The Welsh capital, Cardiff would be an ideal place for the Friends to live. Specifically in the leafy area of Pontcanna. Known for its green spaces, Pontcanna Fields, Llandaff fields and the Sophia Gardens Cricket Ground. With Chapter Arts Centre nearby for live music and exhibitions, an abundance of multicultural restaurants, hip coffee shops and independent stores, Pontcanna would be the best place for a Welsh helping of Friends.

Lufkin Coffee shop would likely be the cafe of choice for the Cardiff version of Friends. With 2 bed apartments in the Pontcanna area costing around £850 – despite being a capital city, Cardiff is the most affordable city on our list. 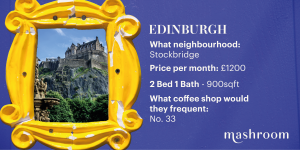 The Scottish capital city and the quaint elegance of Edinburgh would certainly attract the Friends to come and stay. With the neighbourhood of Stockbridge, being the prime location. Edinburgh is full of beautiful old things, and the properties in Stockbridge are no exception. The Georgian and Victorian terraced houses line the streets of Stockbridge. The vibrant neighbourhood on the Water of Leith is home to a lot of affluent young professionals making the most of the speciality shops, posh delis and quaint cafes. The Botanic Garden is perfect for a Sunday stroll 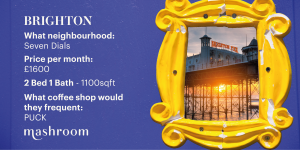 Whilst pretty much the whole of Brighton is a boho paradise, Seven Dials is a fun area bustling with cafes, restaurants and high-end boutiques. The area is less than a mile away from the seafront. Getting its name from the seven streets that all join together in this area, Seven Dials is abundant with quirky delis, interesting shops and aesthetically pleasing buildings.

A 2 bed flat in Seven Dials, Brighton would set you back around £1600, but there are plenty of apartments that surpass that figure. PUCK coffee shop sits in the heart of the neighbourhood and would be perfect for the Friends to meet up for a flat white. 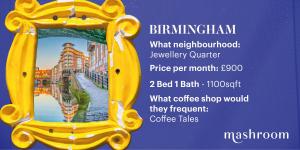 Birmingham, the UK’s second city, bang in the middle of the country, it’s a great base to explore the whole country, not just the midlands. Birmingham has a thriving multicultural vibe – just like New York, and there is plenty to see and do there. The Jewellery Quarter of Birmingham city centre is home to more than 100 jewellery shops, diamond dealers and jewellery workshops, along with the Museum of the Jewellery Quarter, it’s clear where the area gets its name. But aside from the bling, there’s many trendy bars and restaurants, art galleries and to keep you entertained.

The price for a 2 bed flat of similar sizing to the Friends apartment, would be around £900. Coffee Tales nearby would likely be serving Joey his cappuccinos daily. 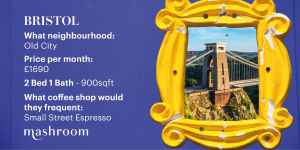 Bristol is a fun and quirky city, filled with independent shops and eateries. The Old City is a charming neighbourhood known for its historic buildings, craft beer and global street food. With St. Nicholas Market, Exchange Hall, Queen Square and Bristol Old Vic, there is something for everyone.

An apartment in this trendy neighbourhood would cost around £1650 per month. Small Street Espresso would be serving up some great drinks nearby too. 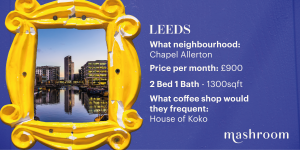 If Friends was set in Leeds, there would be a little bit more cab-hailing for the group, as their neighbourhood of Chapel Allerton is a little further out of the centre of town. The little village-style suburb is filled with quirky boutiques, art-filled bars and high-end restaurants. There is Seven Arts, regularly showing plays and films or the beautiful Chapel Allerton Park for a morning run – but not like Phoebe!

A 2 bedroom flat in the suburb of Chapel Allerton would cost around £900 per month. The House of Koko coffee shop is a real hit with the locals.