Our latest research has highlighted the most unaffordable areas of the United Kingdom where the average house price to wage ratio is concerned.

We compiled data for all the London boroughs and each area across England, Scotland and Wales to calculate the most expensive versus the most economical areas for property when compared to the wage earned. The full data table can be found at the bottom of this page. 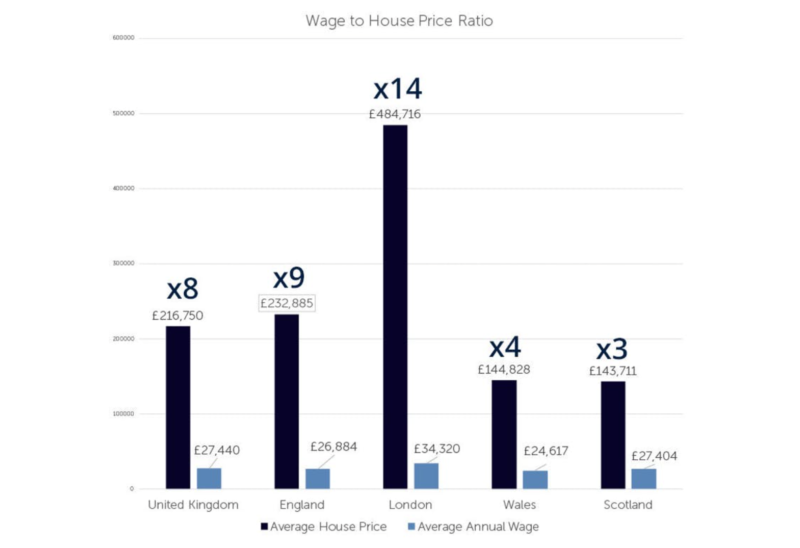 Not surprisingly, the majority of the least affordable areas are found in London where the average house price climbs to 14 times the average wage.

The borough of Kensington and Chelsea tops the list with the average property price at £1,212,375, despite suffering London’s biggest property value decrease in the past year at 6%. The price of property in the borough is now 46 times the average wage (£26,624) and the nation’s biggest gap in wage to property ratio by a long shot.

Staying within the capital, Richmond Upon Thames placed fourth in the list for most expensive average property price to wage in the United Kingdom. It cost 26 times the average wage (£25,636) to get on the ladder in the borough (£659,636), with the area jumping +9% in the past 12 months.

When looking just at England the average house price climbs to nine times the wage on offer.

The most unaffordable region outside of London and third place overall is St. Albans in Hertfordshire, where the average wage is £18,928, while the average property price is £522,716. The house price to wage ratio is 28 higher, meaning a lifetime of saving to afford a property in the area.

The second most expensive region outside the capital, and 6th overall, is South Bucks in Buckinghamshire, where the house price to wage ratio is 25 times higher. The area saw a +14% increase in property value since last year – the average house price now costs £587,645, while the average wage is just £23,192.

Chiltern closely follows behind South Bucks with a wage to house price ratio of 24. This area experienced a +9% jump in property since last year, lifting the average house price to £512,910.

In Wales the lower cost of property means that the gap is just six times the average wage on offer.

Monmouthshire is home to the highest average property price to wage ratio in Wales, costing £221,345 but is only ranked 153rd overall in the United Kingdom, with the average house price 12 times the wage.

With property prices also lower in Scotland the resulting gap across the country is just five times the wage.

The most expensive Scottish region is East Renfrewshire, despite placing 113th in the whole of the UK and the average wage must be multiplied 13 times, to be able to afford the average house price in the area.

The City of Edinburgh placed second in a three-way tie (behind East Dunbartonshire and East Lothian) for unaffordability in Scotland, but is still ranked just 210th throughout the entirety of the United Kingdom. It would take ten times the average wage to be able to afford a property in the Scottish capital.

Property values in England are significantly higher than the rest of the United Kingdom, which is reflected in the wages offered. However, the wages are not always consistent with property prices and have failed to increase at the same pace.

It highlights the unaffordability of the market in England when you consider the difference in Wales, where the highest annual average wage is under £21,000 in Cardiff yet the city’s property value is merely third in the country behind regions with lower averages in annual incomes. Additionally, the average wage in Kensington and Chelsea would take almost a lifetime working to be able to afford a home, which is unrealistic for most let alone the average buyer.

It is important to consider the wage you can earn when buying property to understand the longevity of the investment, as a lower property price doesn’t always mean a better quality of living as the wage will also reflect the local market and economy.