If you like your home shiny and new, then you might want to think about moving to Aldgate.

The East London neighbourhood has undergone significant regeneration over the last few years, which has resulted in a wealth of brand new residential developments.

It’s not just snazzy housing that makes Aldgate an attractive area to live, however. Excellent travel links, a Zone 1 location and the Square Mile just moments away all mean that living in Aldgate is an appealing option for renters looking for a new home.

The EC3 postcode enjoys a prominent central location and is quickly becoming a London hotspot. If you’re thinking of renting in Aldgate, read on and find out everything there is to know about one of London’s oldest areas that encapsulates everything new.

Aldgate is located just under 2.5 miles from Charing Cross and falls under the London Borough of Tower Hamlets and the City of London. It’s a prime City location that’s just one mile away from St Paul’s, Bank and Moorgate. It comes under the EC3 and E1 postcode, the latter of which it shares with Shoreditch.

A brief history of Aldgate

Aldgate is one of the oldest parts of London and was named after a gate in the ancient London wall around the city. It’s believed that a gate at Aldgate spanned the road to Colchester during the Roman period after the London Wall was constructed. It also had a busy thoroughfare running through it. 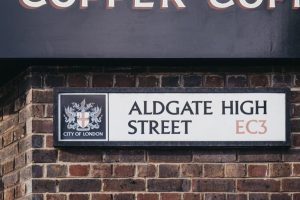 The wall was rebuilt several times over the course of a few hundred years before finally being removed in 1761. From 1700, the old Aldgate Pump (a historic water pump in London)  was used to measure distances between the counties of Essex and Middlesex.

During the 18th century, Aldgate was the centre of the sugar refining industry, which was mostly carried out by German immigrants. As a result, German churches were built in the area. The oldest surviving one (built-in 1762) is located at 55 Alie Street.

An in-depth look at Aldgate

Who lives in Aldgate?

Unsurprisingly, Aldgate is popular with many city professionals who enjoy the convenient transport links into the heart of the City. The average age is one of the youngest in the capital at 29, 77% of which rent their homes.

Types of property in Aldgate

The overwhelming majority of homes in Aldgate are apartments constructed within the last 10 years. The area has seen plenty of regeneration, which has resulted in new homes, most of which feature appealing lifestyle amenities like on-site gyms, spas, entertainment rooms and concierge services. 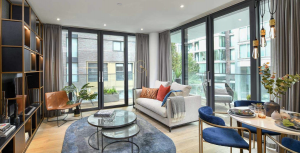 Goodman’s Field on Leman Street is a stylish multi-building development, while Altitude Point is another sought-after development. Royal Mint Gardens and Times Square add to the ever-growing list of plush buildings in the area.

Aldgate’s central location means that rental prices are higher than in many other parts of London. Expect to pay in the region of £2,000 per month for a one-bedroom property, £2,700 for a two-bedroom apartment and £3,200 for a three-bedroom home.

Aldgate is well-connected travel-wise. Aldgate tube station is on the Circle Line between Tower Hill and Liverpool Street. It also has a stop on the Metropolitan Line. Aldgate East tube station serves the Hammersmith and City Line and the District Line.

Local buses go into the City of London and the West End, while many of East Central London’s areas are within walking distance. Fenchurch Street station provides train services to east London and south Essex, including Upminster, Grays, Basildon, Southend and Shoeburyness. Aldgate is in Zone 1.

Restaurants and shops in Aldgate

Amenities in Aldgate come in large supply, as is the case in any Zone 1 location. If you’re thinking of moving to Aldgate, you won’t have any issues finding a local eatery or somewhere to shop — whether you’re looking for international cuisines or the latest designer names.

Enjoy a stylish and contemporary design at VQ Aldgate, which serves up a selection of delicious food and fantastic cocktails. It’s open 24 hours, so you can pop in for a snack or drink no matter the time of day (or night).

A round of tapas at Barcelona Tapas Bar and Restaurant will have you feeling like you’re in the heart of the Catalan city. Chow down on authentic dishes that include habas fritas, jamon serrano, chorizo iberico and many more tasty Spanish treats.

Shop the looks at One New Change, which features fashion stores like Hugo Boss, Kurt Geiger and Reiss. Then grab a bite to eat at Bread Street Kitchen, The Ivy Asia or Madison. Oh, and while you’re at the later, head to the rooftop bar and admire sweeping views of the capital.

With more than 60 shops and stalls and 40-plus eateries, Old Spitalfields Market offers endless delights. The historic market also hosts several events throughout the year and has quickly gone on to become a popular London tourist attraction.

Whether you’re going from bar to bar, dining at the latest London restaurants or looking for cultural attractions, Aldgate has you covered. It’s just a hop and skip away from London’s Square Mile and is full of fun things to do and see. 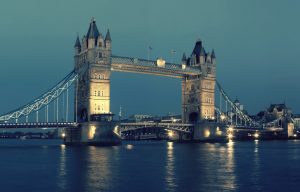 Aldgate is one of London’s oldest neighbourhoods, yet everything about the EC3 postcode feels fresh and new. Its excellent central location provides easy access to the best of the capital, while the area itself features an array of attractions and landmarks. You don’t need to be a City professional to make the most of Aldgate, and it’s the perfect location to keep discovering the endless things London has to offer.