We’ve painstakingly charted the average house price for each of the 280 tube stops on the London Underground network.

It was well worth time time though, because it looks awesome!! Unfortunately, the Transport for London weren’t too happy about us basing our design on a map replicated around the world, so we’ve had to take it down, but we can still give you the rundown of our research below.

Across the tube network even one stop can make a big difference in property price. Although not the largest gap in price on the tube network, the most notable is certainly Wembley Park to Finchley Road. The average house price in Finchley Road exceeds £1.4 million, but taking the tube just eight minutes down the line to Wembley Park, can save UK buyers £1 million on their property price.

On the Northern Line moving one stop from Hampstead (£1.4m) in Zone 2 to Golders Green in Zone 3, where the average house price is £962,000, can save you nearly half a million on the price of your property.

Further south, moving one stop and one zone from Turnham Green out to Acton Town will also save you £400,000 on the price of a London property. The average house in Turnham Green, Zone 2, will cost you just shy of a million. However four minutes down the District or Piccadilly line and the average house price in Acton Town only just tops £500,000.

But for those looking to really maximise their property potential on the London Underground, the most affordable property prices across the whole network are found in Zones 4 and 5. In fact the cheapest all lie within a nine minute tube journey of each other in the London Borough of Barking and Dagenham. Barking, Dagenham East and Becontree all offer an average house price ranging from £237,000 – £240,000. 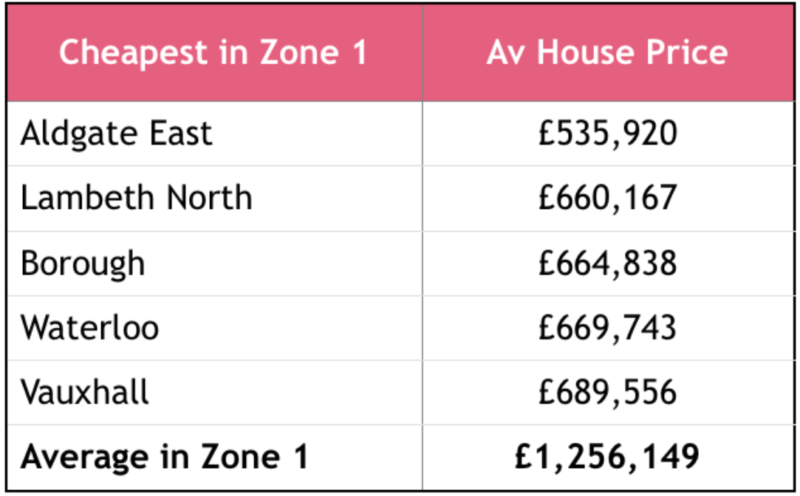 Of course as you head further out of inner London the prices start to drop and, with an average house price of £796k, Zone 2 is 37% cheaper than Zone 1. Where property prices are concerned, the re-shuffling of the zonal boundaries has seen some new additions to Zone 2’s more affordable property market. West Ham (£313k), Canning Town (£324k) and Stratford (£340k) to the east, join originals Bromley-by-Bow (£330k) and North Acton (£385k) as the most affordable spots in Zone 2. 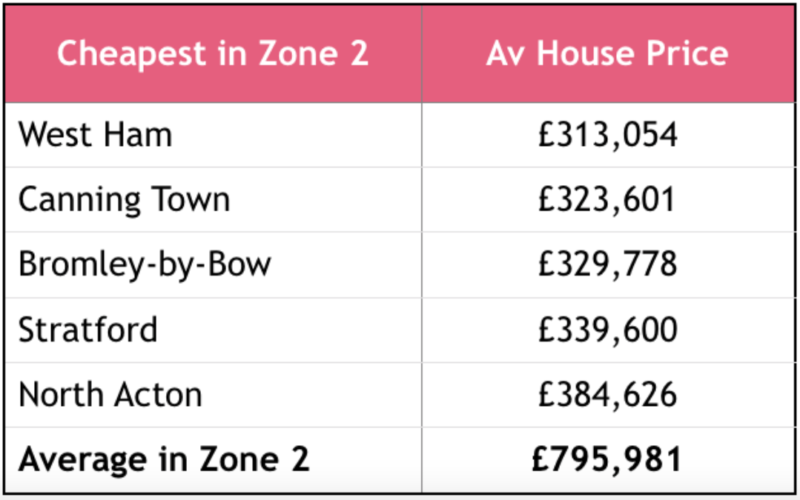 The tube map is a fascinating way of breaking down the London landscape, especially where property price is concerned.

Despite the constant threat of strike action, a property close to a tube stop, on a good line, remains one of the most sought after pieces of property in the capital. Close proximity to a tube stop will always act as an additional selling point for sellers and in most cases, is justification for a higher asking price.

It’s well worth doing your homework when buying in London, because as this research shows, sacrificing a few extra minutes with a longer commute can result in a considerable reduction in the price you will pay for a property.”