Fastest Broadband Hotspots in the UK

We have come a long way since the infuriating days of dial-up.

Broadband means there’s no longer the need to wait patiently while listening to that excruciating screeching noise as your modem takes you the AOL homepage.

These days, the average internet speed is 54.2Mbs. But where in the U.K. has the fastest broadband speeds?

We recently covered the best places for seaside,commuter and market towns, as well as rural hotspots. Now we’re looking at the speediest places in the United Kingdom for super fast broadband.

Read on, and find out which areas made the cut.

The 2017 UK City of Culture is also home to the fastest broadband speeds in the UK with an average of 87Mbps. The small city of Hull sits on the north side of the Humber in East Riding of Yorkshire and features pedestrian-friendly streets with branded and independent shops and a popular arts centre called Artlink.

Neatly nestled between Gloucestershire and parts of the Cotswolds, Swindon enjoys impressive broadband speeds of 84Mbps. The large town has courtyards and alleyways that house traditional shops, restaurants and pubs. Many of the houses in the area are made up of properties from the Victorian and Edwardian eras – with superfast broadband, of course.

The northeast area of Cleveland is located in the North Riding of Yorkshire area and calls Guisborough its capital. The attractive market town has 18th-century markets that people flock to from far and wide. There might be even more people heading to Cleveland when they find out that average broadband speeds are 75Mbps.

Just 40 minutes from London Waterloo, Guildford is a popular commuter town that is known to have one of the U.K.’s most aesthetic high streets. Attractive buildings from the medieval and Georgian eras aren’t the only thing it has going for it, though: broadband speeds average 72Mpbs.

Robin Hood country can add another string to its bow as it is currently ranked as the fifth-highest location in the U.K. for broadband speeds. If you live in Nottingham, expect to get speeds of around 69Mpbs. The East Midlands city has plenty going for it other than fast Internet speeds: the bustling city centre is full of shops, restaurants, nightlife and cafes to explore. 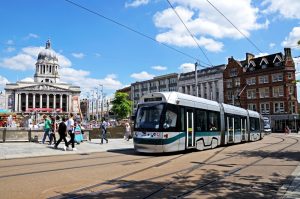 Watford is the closest area to London for fast broadband speeds, thanks to an average of 65Mpbs. It’s located just 14 miles from northwest London, with the “ford” in Watford referring to an old route between London and northwest. The Watford property market is always in high demand thanks to lower prices than the capital and journey times of around just 15 minutes.

Best of the rest

The need for speed

If broadband speed is at the top of your list when moving home, you could do a lot worse than one of these areas. With the introduction of 5G, things are about to get even faster, and more of the U.K. will see blistering internet speeds in the not-too-distant future.