Operation Warm Welcome: Could you help save a life?

There is no hiding from the horrors that are currently befalling millions of Afghan families.

As the country fell under Taliban rule, people across the world looked on in shock and despair as terrible scenes unfolded on our TV screens and news channels.

But what happens next? Where have the thousands of people that flooded Kabul airport gone, and are they safe? 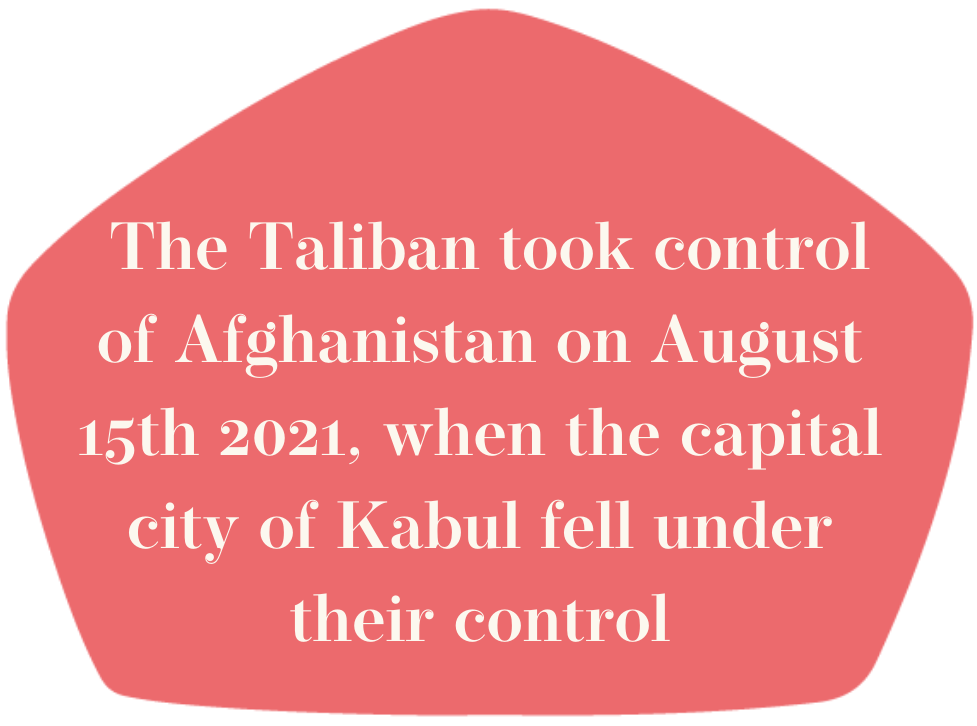 What is the current situation?

Following twenty years of fighting, the Taliban took control of Afghanistan on August 15th 2021, when the capital city of Kabul fell into Taliban control.

The Taliban recently announced an interim government, as they move from an insurgent group to the official rulers of Afghanistan.

The Taliban last held power in the 1990’s, and many of today’s interim cabinet positions are held by loyalists who have previously sat in these seats of power. Despite promises that this time round things will be different, there is an understandable fear that nothing has changed since the somewhat bloodthirsty days gone by.

The Afghan people, and the watching world, are sceptical and scared. There are many suggestions that the government is not behaving as a government should, with countless reports of violence, threats against women and minority groups, and concerns over terror tactics being used to keep control over the country.

What has the UK done so far?

In October 2001, the UK took up a military presence in Afghanistan. Entering the country initially as part of Operation Veritas, by October 2014 all combat troops had been withdrawn and the UK’s role became one of training and support under NATO’s Resolute Support Mission.

During the conflict period, over 7,000 local civilians were employed by British forces to help overcome cultural and language barriers within Afghanistan, with nearly 3,000 people working directly on the frontline, alongside our own soldiers.

Due to the irreplaceable assistance offered by these brave local people, who were instrumental in keeping thousands of British service people safe as they worked in high-combat areas, many of these frontline personnel are entitled to relocation within the UK, and financial support. 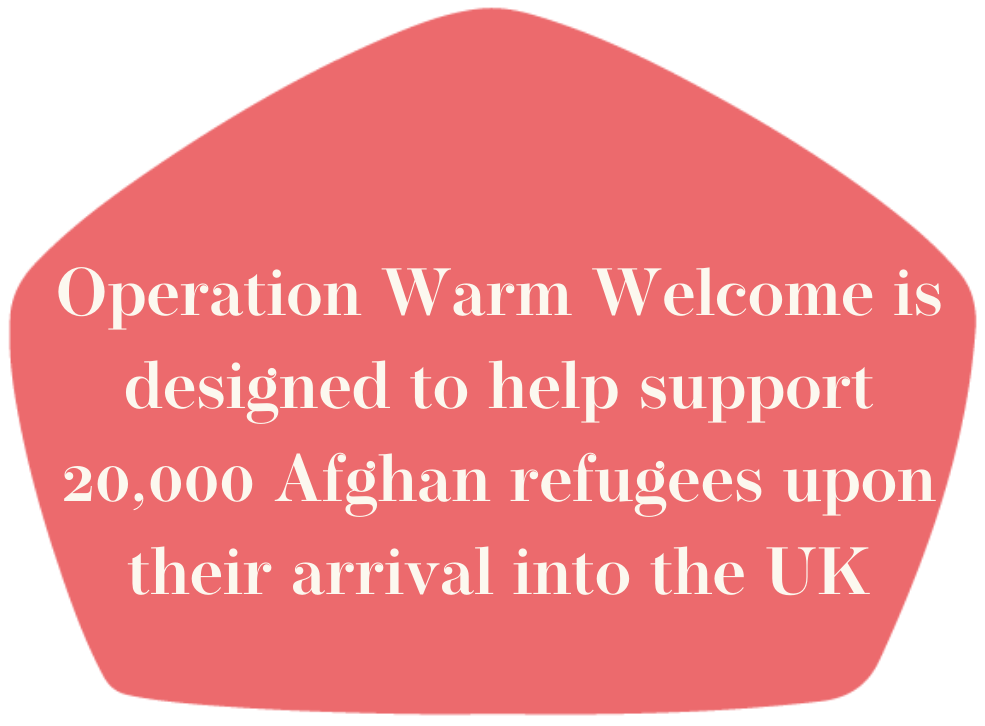 What are the UK government doing now?

This is clearly a humanitarian crisis, and one that the UK Government has recognised as something that needs urgent action.

In order to support the individuals and families who are in such desperate need of an escape route out of what is now a very dangerous location for them, the UK government has launched a scheme called Operation Warm Welcome, which is designed to help support 20,000 Afghan refugees upon their arrival into the UK.

Designed to meet both the immediate needs of individuals and support in a more long-term fashion, £200million has been earmarked to meet the cost of the first year. The scheme is complex, and whilst well-funded, it is also heavily reliant on the goodwill of the British people to make it a success.

The primary elements are:

What about housing, isn’t there already a crisis?

This is a question that’s cropping up everywhere. You only have to click on a social media post about the topic to be met with anger and frustration about council housing waiting lists and unavailable housing solutions.

However, it is important to remember the atrocities that these people are fleeing from, and the danger that many have put themselves in to serve alongside the British forces for many years. Whilst that doesn’t ease the frustrations of many who may be waiting for social housing, many of these people have worked alongside our troops through years of active warfare, and remaining in their homes could be a death sentence.

How can landlords help?

It is not unusual for local authorities to contact private landlords, asking for them to come forward with any properties that may be suitable for housing. Many councils already run a PRS scheme, encouraging private landlords to engage with the authority, either leasing their property to the council or taking on tenants directly under an AST.

Most authorities have also successfully run a Syrian resettlement scheme for many years, welcoming refugees from war torn Syria, and quietly settling them into communities. Whilst largely unpublicised, this scheme has been very successful, with families receiving one-on-one care worker support, helping them integrate into British society, education, and workplaces. A brilliant scheme that goes largely unsung. It works well for the landlords involved too. They enjoy higher than average rents, five-year tenancies, and the comfortable knowledge that their properties will be well maintained for the duration of the period.

So, can the same be replicated on a larger scale for Afghan refugees? There is certainly hope that this will be the case, according to Counsellor Gerry Clarkson, Leader of Ashford Borough Council in Kent:

“The support of council staff, local residents, voluntary organisations, private sector landlords and community and faith groups was absolutely crucial to enabling successful integration of our Syrian families and I am confident that Ashford will once again rise to the challenge of helping Afghan families to start new lives here in the heart of the Garden of England.”

However, Operation Warm Welcome is somewhat larger than the Syrian Resettlement Scheme, so local authorities are having to pull out all the stops. Whilst local landlords were approached individually regarding the Syrian effort, this gentle approach may not get the ball rolling quite fast enough at the moment. Currently, thousands of Afghan families have been evacuated safely, but are now being held in hotels. There is a real sense of urgency about this situation:

“People are asking how they can help. The single thing we need right now is offers of suitable accommodation, but this needs to be balanced with existing high levels of demand for housing in our area,” said Councillor Graham Carr-Jones, Dorset council’s portfolio holder for Housing and Community Safety. “That’s why we are specifically looking for private landlords or owners of second homes to come forward rather than asking social housing providers.”

In Afghanistan, it is traditional for families to stay living together under one large, multigenerational roof. It is common practice for women to move in with their husband’s family once they marry, and for adult children to remain in the family home much longer – sometimes staying for their entire lives. This is especially common in a village setting, where economic circumstances dictate that it can be more viable for families to contribute to one household, rather than split the cost. This can lead to larger-than-average households, with the average home housing eight people.

It is clear that larger properties are needed, which are often trickier to come by. As property size increases, one very real concern for many landlords is the discrepancy between the Local Authority Housing Rate (the maximum amount paid by the council for housing) and the market value of a property.

However, councils across England, Wales and Scotland have been provided with £5million to support Afghan families coming to the UK and provide rental rate top-ups to meet the costs of renting properties.

“We are in debt to those who had the courage to help our troops in Afghanistan and they deserve to have access to living accommodation in a safe, community orientated environment,” stressed Councillor Ray Cade, Cabinet Member for Housing and Benefits at Wealden Council. “I urge any landlords with vacant properties to come forward and contact us. You can be assured you will receive the support you need from our dedicated Housing Team.”

I’m not a landlord, how else can I help?

Clearly, not all of us have a portfolio with the odd five-bedroom house just sitting empty. But is there anything else we can do?

Unsurprisingly, any help is very gratefully received. Many people arrived in the UK with just the clothes they stood up in, so any donations of good quality clothes and shoes are really helpful. There are lots of children and babies too, so if you have any items that would work for little ones, including nappies, they are hugely helpful (toys are lovely too!)

Charities such as Care4Calais are collecting items across the UK, their collection points are available on their drop off map.