Culture impacts everything in day-to-day life, from food to housing choices.

Despite being in one continent, European countries differ significantly – and this includes their views on housing habits. In the UK, renting is often seen as less favourable with every resident seemingly in a rush to get onto the property ladder.

However, in many European countries, renting is seen as a better option than buying. Tenants embrace the ‘no-ties’ attitude and the safety net of the landlord’s responsibility to fix any problems. There are many positives to renting a property instead of buying, including the lack of bank loans, so why do some countries turn their nose up at it?

Here at Mashroom, we’ve dug into the data to reveal which European countries lead the way for embracing the rental movement.

When scored overall based on rankings across all three categories, Germany rose through the ranks to steal the crown with first place in two out of three categories. We looked at; the cost of rent, the laws protecting tenants and the number of people who rent, to determine who took the top spot.

Germany’s neighbours, Austria and Belgium, came second and third respectively. Austria is famed for its extended summer vacations, long lunch breaks and short workdays, so it’s easy to see why people are drawn to living there without ties.

The graphic shows the top 10 countries for renting, but who came bottom? With expensive rent, and less robust tenant laws than other countries, Spain comes in last. Although in the last 12 months they have moved to increase legal protection for renters. 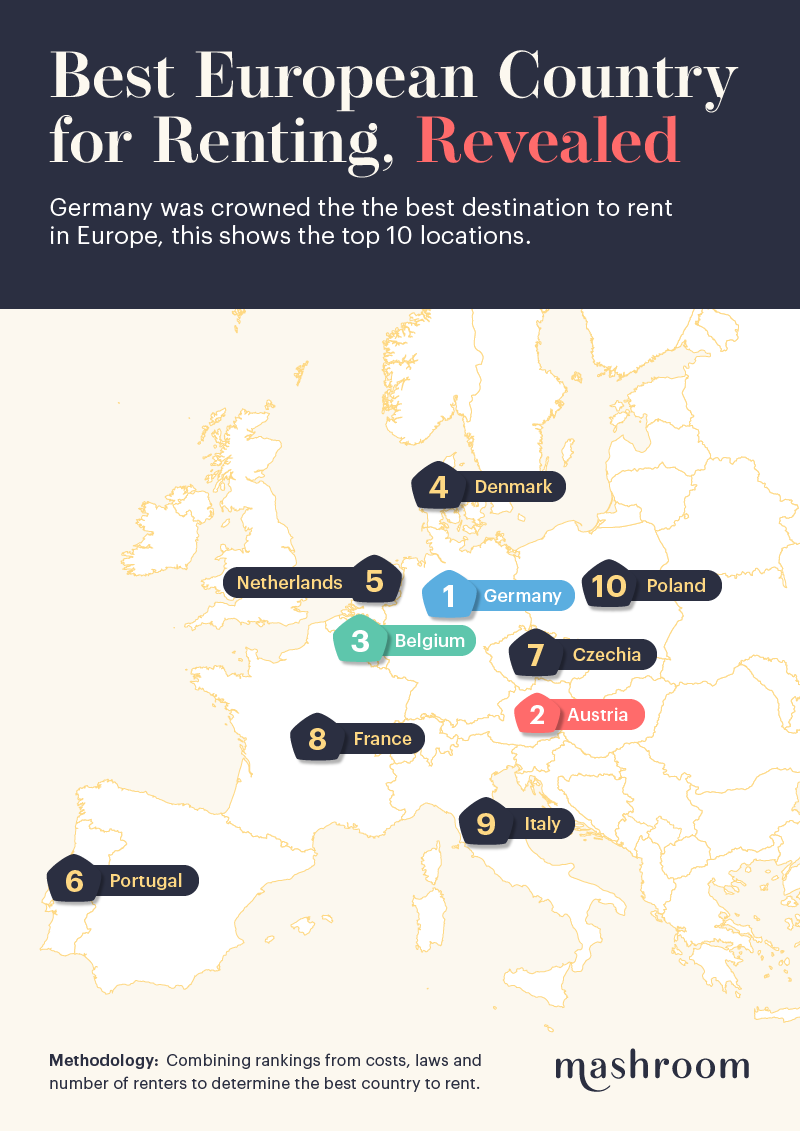 Germany takes the lead with the highest percentage of renters which make up over half of the country’s population. Germany is well known for its open-minded attitude to renting, with tenants enjoying the no-ties lifestyle.

Slovenia came in the last place with a tiny 2.4% of the population renting property. Yet with stunning scenery, skiing and beautiful beaches, it’s easy to see why people want to stay put in the country.

Surprisingly, the UK came 8th, with almost a quarter of the population renting. As the average age of renters in the UK is 40, compared with 57 for owner-occupiers, this is a trend we could expect to see an increase over the coming years. 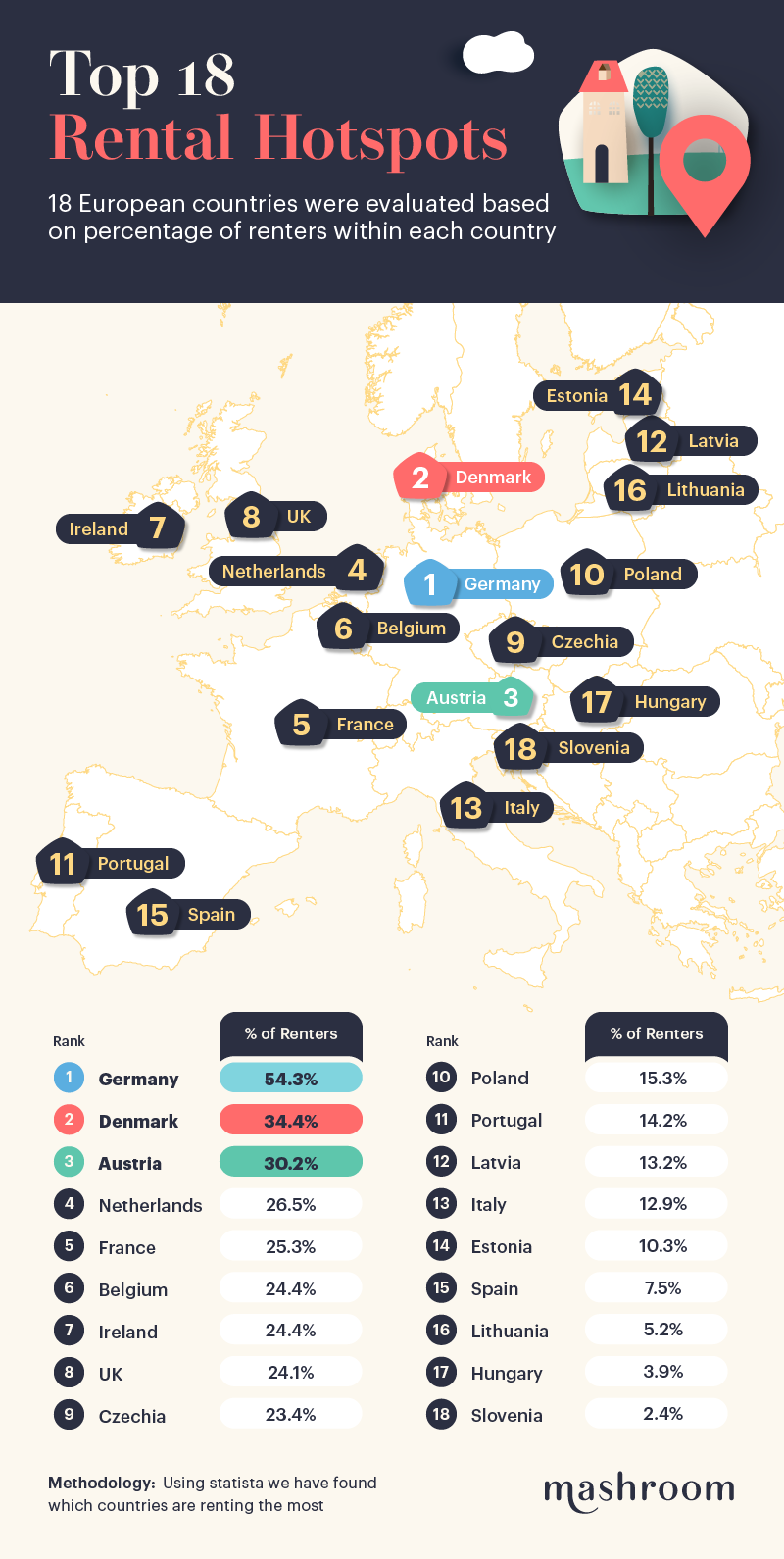 Cities with the Most Expensive Rent

Berlin was determined to be the least expensive for average monthly rent per square meter with only £6.58, this is a far cry from £25.08 in the French capital city, Paris.

London is known as one of the most expensive capitals in the world, the city sits on the expensive side of the scale with £18.13 in rent per month.

In the midpoint of the table, we see Warsaw, Rome and Prague. These are all popular tourist destinations which could impact rental prices due to the increase in local amenities. 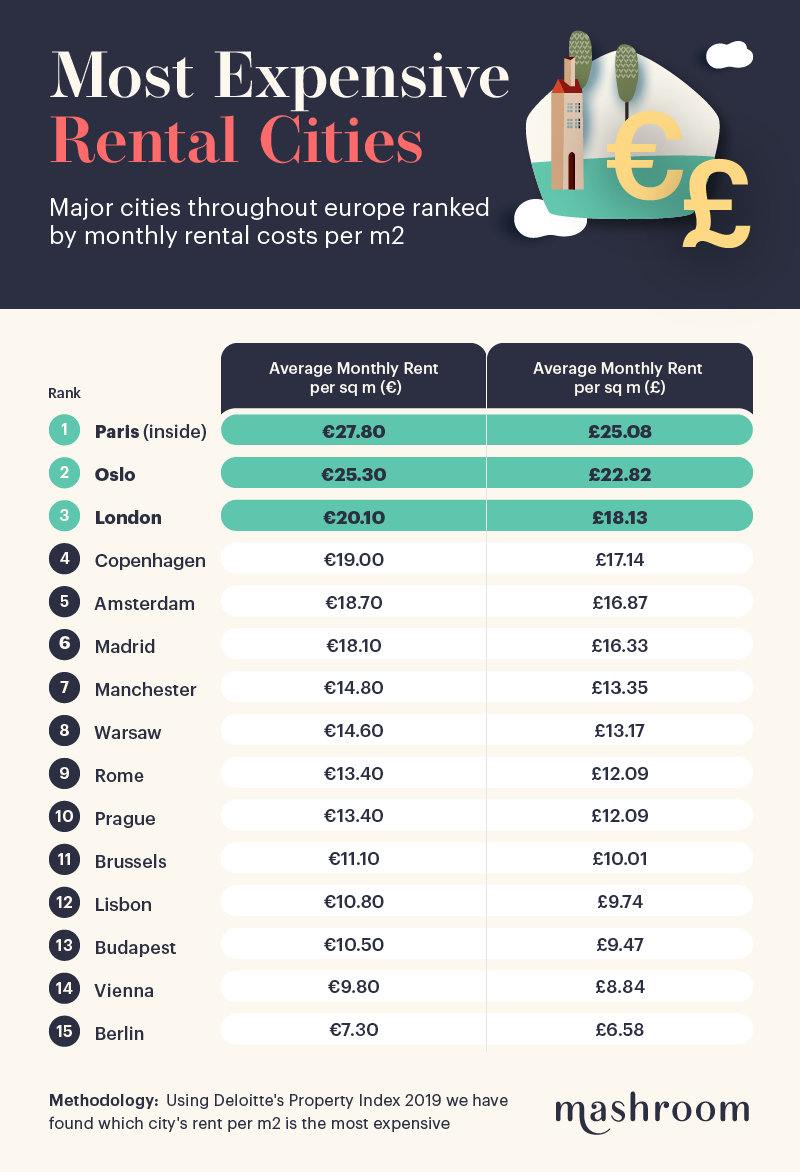 A very important factor when renting properties is the laws protecting tenants and landlords.

From this, we discovered that Denmark was the only country that scored 5/5 due to having strongly pro-tenant laws. The UK, however, came joint last and gained the description of pro-landlord.

Hungary and Poland appear to strike the balance of protecting both parties. In Hungary, they have a system wherein some rental contracts, you can sign a tenancy without even mentioning the rent amount. The proposed rental amount is sent to the tenant 8 days before moving, at which point they can dispute it. 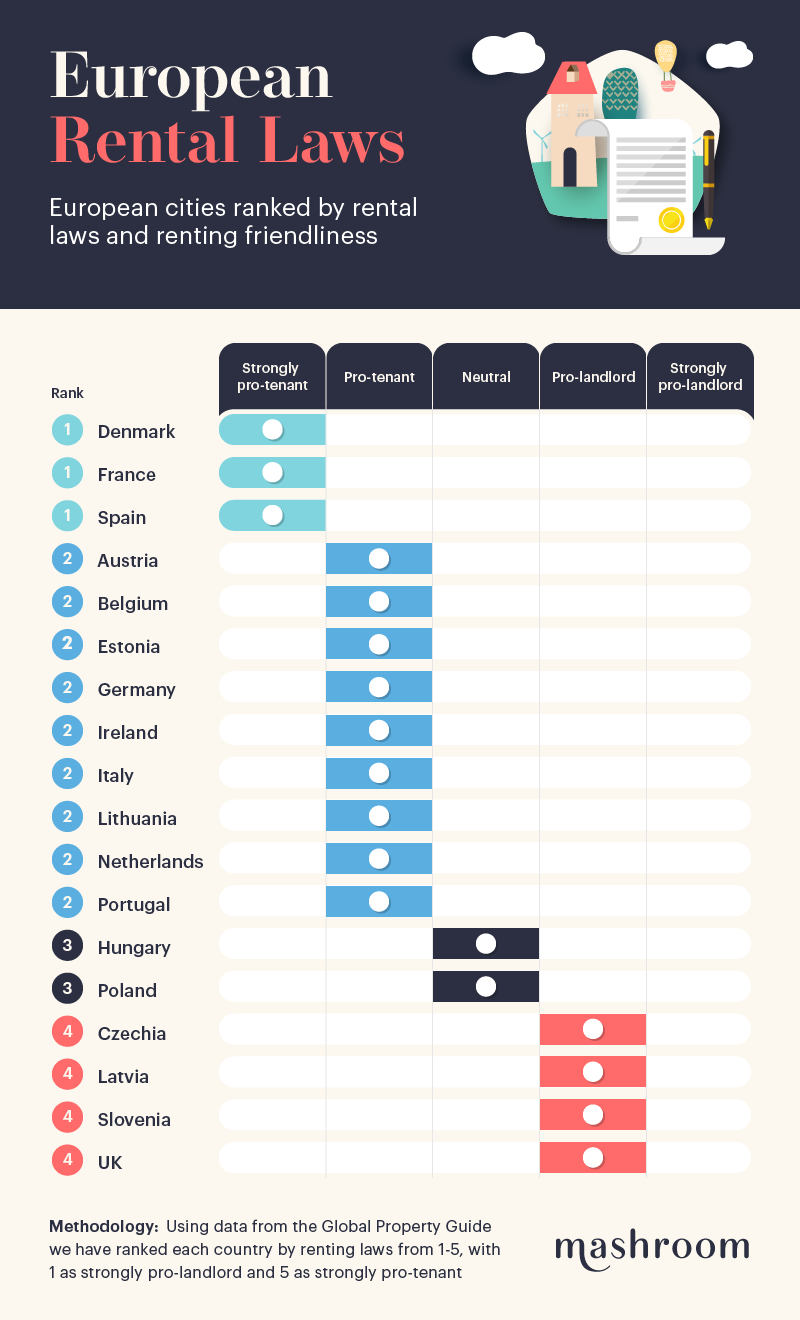 Using Statista we found which countries are renting the most, and at what proportion of the population. Using Deloitte’s Property Index 2019 we found European city’s rent per m2 and used this to calculate the most and least expensive.

The overall top cities to rent was calculated by using a ranking system based on costs, laws and number of renters to determine the best country to rent.

Get started for free

Get started for free