What Does the Recession Mean for My House Sale?  

Now we know that the UK is in a recession, many homeowners will be wondering just what it means for house prices and if they’re going to see a crash similar to the credit crunch of 2008.

While headlines might make for grim readings, not all is as bad as it seems – especially as far as the UK housing market is concerned.

If you’re thinking about selling your home or are currently in the process of a sale, you might be somewhat concerned after seeing the news. But worry not! We’ve put together this handy guide that tells you just what the recession means for your house sale.

Gross domestic product, otherwise known as GDP, measures the size of the country’s economy. As of this morning (12/8/2020), the GDP fell by 20.4% – the worst on record. However, this news isn’t particularly shocking, given that GDP figures are backwards-looking indicators.

In plain English, that means that GDP measures the past couple of months. Today’s numbers take into account April, May and June, which were also the main months of the lockdown. With business coming to a halt across the world during that time, it’s only natural that the figures read alarmingly.

But there is a silver living: monthly numbers show that the UK is recovering from those stark months. GDP grew by 8.7% in June as lockdown restrictions were eased and pent-up demand led to greater spending. It grew at a rate faster than many City analysts predicted. 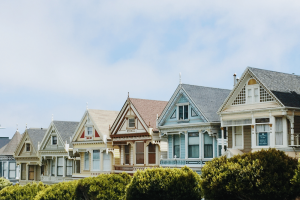 How will the recession impact the UK housing market?

Unlike the last recession, which was a housing market crash, bricks and mortar in the UK is likely to fare much better this time around. We can already see confidence in the market with the announcement of a stamp duty holiday, and house prices continued to rise in July by 1.6%, – 3.8% higher than July 2019.

Ninety-eight percent of properties are selling at their asking price, which has been reported as a record high. So what gives? Have we all ignored recession warnings and are ploughing on with the buying and selling of homes, the most expensive transaction many of us are ever likely to make?

The answer isn’t a simple yes or no. House prices are still predicted to fall towards the end of this year, and in the early part of 2021. However, the psychological effects of lockdown have left many contemplating whether to move home now, with the possible uptick seen as a result of people reevaluating their living arrangements.

Yet, even with a potential price drop in the months ahead, there’s still reason to be quietly confident about the UK property market…

If prices do fall later in the year, the plunge isn’t likely to be anything dramatic. Some analysts have predicted a drop of around 10%, which might sound high on the face of it. But dig a little deeper, and low figures could help boost the market further, especially if you’re involved in a chain.

Lower property prices mean cheaper onward purchases. For example, if you’re selling your house for £200k, a 10% decrease means you’re potentially selling for £20k less. But if your new property purchase price is £300k, you could save £30k if the price drops by 10% on that property too. Essentially, you’re saving around £10k!

There’s a need to keep an eye on the short-term effects of the economy, but you also can’t ignore the fact that housing transactions are in a healthy state. People still need to move, whether it’s for a new job, upsizing to start a family or downsizing because the kids have left the nest.

Then there’s the stamp duty holiday, which has eradicated stamp duty due on homes up to £500k (unless you’re an investor or buying a second home). Many buyers have also brought forward their plans to move, as they look for areas with outside space amidst concerns of another lockdown. All these components combined together have supercharged the market.

Of course, there is another significant factor at play in the property market: mortgages. Rates are at an all-time low, and the current climate doesn’t suggest they are going to rise again anytime soon.

Lenders need to lend too, which means they are slowly returning to the market after lockdown with a variety of products – many of which include higher loan to value mortgages. With more products to take advantage of, homebuyers can be quietly confident about finding the mortgage they need.

Is now a good time to sell your home?

With furlough ending in the next couple months and job searches likely to increase, it won’t come as a surprise to learn that many buyers and sellers want to be one step ahead. Ultimately, they want to be happy in their new home while there’s still certainty in the market.

A lack of summer holidays to far-flung destinations also means that people likely have a bit more than usual stored when it comes to finding a few extra thousand for a new home. This is a different summer than we’re used to, with less attention on holidays and more focus on moving home.

Renting your home with Mashroom

The housing market has been stagnant in the last few years, with Brexit complications making many people “wait and see”. The Boris-bounce post-election brought back some buoyancy, but that was mostly halted with the coronavirus pandemic.

Now, as we ease out of lockdown, it seems that people have grown tired of continuously waiting. They want to get on with their lives, and that includes buying selling, renting their homes. If you’re one of those people who believe it’s time to rent out our team here at mashroom would love to help.

Request a callback, and one of our local property experts will be in touch to provide a market valuation and we’ll give you all the information you need to make an informed decision. When it comes to the UK housing market, there really is no time like the present.