A metropolis within a metropolis, sometimes Canary Wharf feels like its own city. Mega skyscrapers engulf the city skyline, while tranquil waters from the River Thames act as the backdrop to this mini-city in East London.

Along with The City, Canary Wharf is one of the two primary financial hubs in the capital. While the area conjures images of suited-up professionals working on the stocks, over the years, it’s developed as a popular residential neighbourhood.

The E14 postcode is now one of London’s super-prime hotspots. And if you’re thinking of moving to Canary Wharf, you’re in luck. We’ve put this guide together so that you can learn everything there is to know about London’s financial behemoth.

Where is Canary Wharf?

Canary Wharf is located in East London on the Isle of Dogs. It falls under the London Borough of Tower Hamlets and is the capital’s secondary central business district behind The City. Along with Heron Quays and Wood Wharf, the area forms the Canary Wharf Estate.

A brief history of Canary Wharf

Between 1802 and the 1980s, Canary Wharf (or at least, what would become Canary Wharf) was part of the Isle of Dogs, Limehouse and Poplar. Up until the 1960s, it was one of the busiest ports in the world. And yet, by the 1980s, the port was completely closed.

The Canary Wharf you see today began when Michael von Clemm, former chairman of Credit Suisse First Boston (CSFB), came up with the idea to convert the area into a back office. After further proposals, it was decided that Canary Wharf would become a new business district in London.

Construction began in 1988, with the first buildings completed in 1991. This was led by One Canada Square, which was the UK’s tallest building at the time. From the early 90s onwards, Canary Wharf morphed into a financial mecca filled with shiny new skyscrapers that have become iconic additions to the London skyline.

An in-depth look at Canary Wharf

As far as neighbourhoods go, Canary Wharf is relatively new. Only in the last 10 years has it risen to prominence as a genuine residential area. Its population is around 12,500, most of which is people working at one of the blue-chip companies in area.

Types of property in Canary Wharf 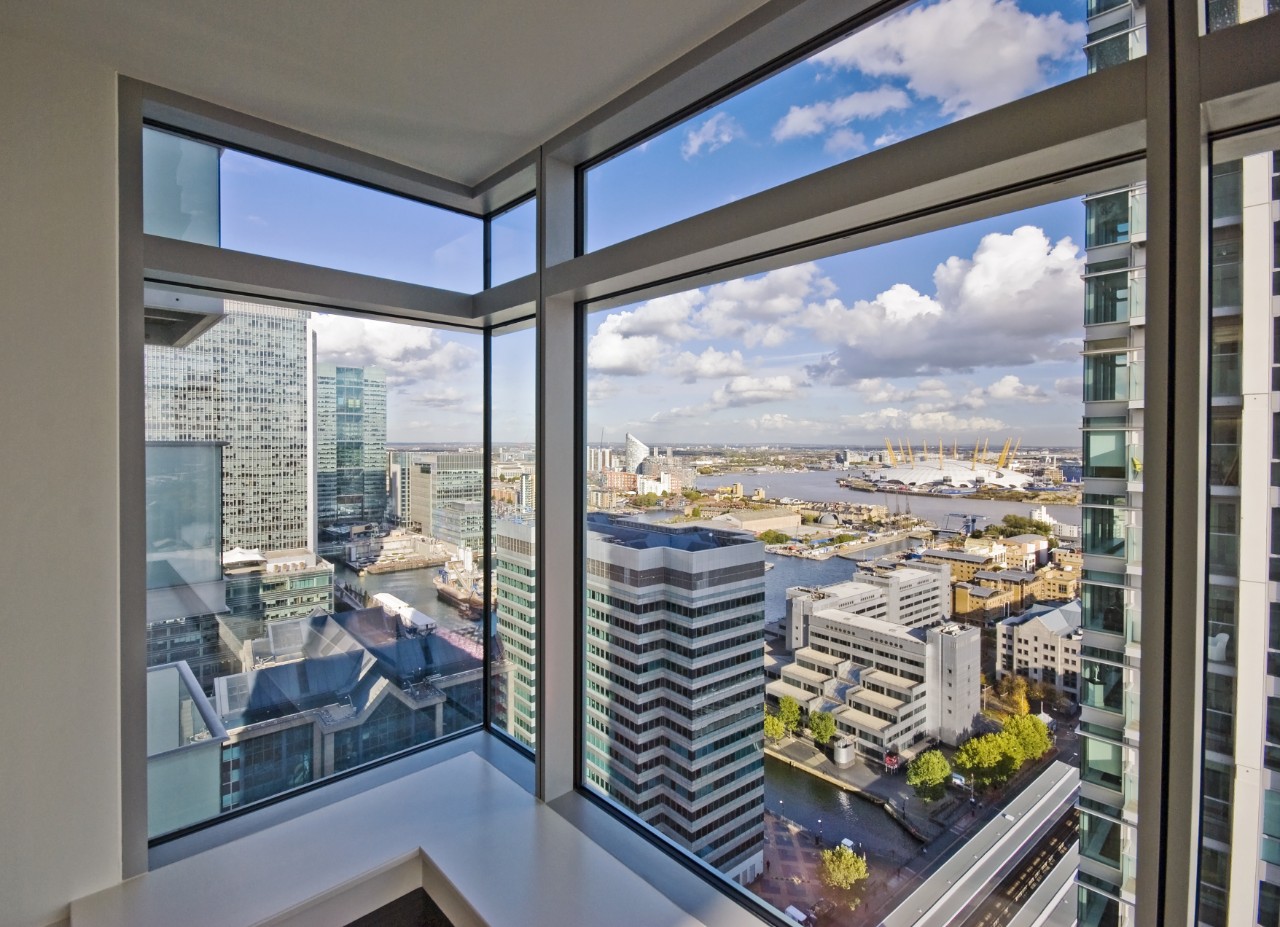 The overwhelming majority of homes in Canary Wharf come in the form of fancy skyscraper apartments. Many of these feature five-star amenities, such as concierge services, on-site gyms, swimming pools and spas and, in some cases, restaurants and bars.

Heron Quays is seen as the residential hub of Canary Wharf. It’s the home of Pan Peninsula and The Landmark, two of Canary Wharf’s most notable residential developments. There is also a smattering of period homes mixed in with the modern apartments.

If you’re planning on moving to Canary Wharf, expect to pay around £1,600 per month for a one-bedroom home. Two-bedroom flats achieve in the region of £2,500, and three-bedroom-and-up properties enter the market from £3,300 per month. 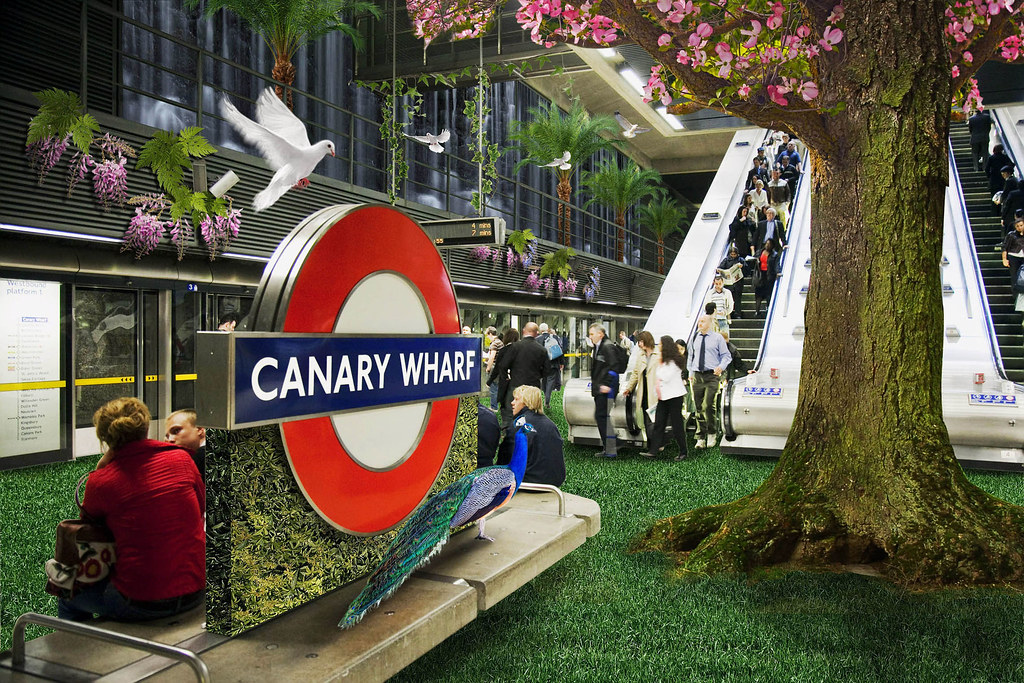 Canary Wharf might feel like its own island away from London, but the area is well connected to the rest of the city. The Jubilee Line at Canary Wharf tube station gets you into Bond Street in less than 15 minutes, and the DLR at Heron Quays has services to Bank in 12 minutes.

Once the Canary Wharf Elizabeth Line is complete, residents will enjoy even better connections. Expect quick services to major London hubs like Liverpool Street and easy access to Heathrow Airport. Canary Wharf is in Zone 2.

Everything about Canary Wharf is coated in a shiny new layer, including the restaurants and shops. Whether you’re grabbing a bite set to the backdrop of river views or shopping at the Canary Wharf Shopping Centre, you’ll be sure to get a “five-star service”.

Located in Crossrail Place, Giant Robot is home to Street Feast. Expect to find a range of street food traders offering up scrumptious delights with an eclectic mix of dishes. Enjoy food and booze while soaking up panoramic views of the London skyline.

Serving the finest in Japanese cuisine, to the backdrop of chilled-out rustic settings, ROKA is a favourite with the locals in Canary Wharf. Located in Park Pavilion, transport yourself to Japan without having to get on a plane. Sample the best of contemporary Japanese robatayaki cuisine at ROKA.

If you’re moving to Canary Wharf and are looking for a new local, head to The Narrow in nearby Limehouse. This Gordon Ramsay-owned gastropub serves up traditional pub grub and fantastic Sunday roasts, not to mention a selection of real ales.

Find your fun in Canary Wharf with a range of entertainment and cultural amenities. Go bar-hopping along the river and take time out to enjoy a scenic stroll in one of the nearby open spaces. Or cosy up for a movie night at the Everyman Cinema.

Over the years, the number of people moving to Canary Wharf has grown exponentially, and it’s now considered one of London’s best neighbourhoods. If you like the idea of living in a modern area with shiny high rises and peaceful waterside settings, it’s time to find a home in Canary Wharf.