Bournemouth is a popular, vibrant city by the sea, characterised by stunning coastal sunshine and a refreshing seaside breeze.

Protect your belongings with

Today, Bournemouth is a popular destination with tourists and visitors for its beaches and nightlife; it’s known in the region for its excellent leisure and entertainment opportunities.

If you’re thinking of moving to Bournemouth, then you’re in luck; we’ve put together this guide to help you figure out Bournemouth’s best bits.

Bournemouth is a seaside resort town on the south coast of England, in the county of Dorset.

Bournemouth is also just a stone’s throw away from the New Forest National Park, a popular, historical tourist destination. 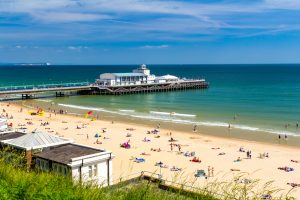 A brief history of Bournemouth

The area surrounding Bournemouth was relatively uninhabited – aside from a scattering of smaller settlements – until the 1800s.

In 1812, Bournemouth’s first official residents arrived; the retired army officer Lewis Tregonwell and his wife, who built their home there.

Tregonwell decided to build a series of villas on his land between 1816 and 1822, thinking that people would rent apartments to enjoy bathing in the sea. He also planted hundreds of pine trees, as they were thought to help lung conditions such as tuberculosis. These were all attempts to promote the town as a resort for health and wellness.

Bournemouth became known for its medical use of seawater and its pine-scented air in 1841, thanks to Augustus Granville, the author of The Spas of England.

The arrival of the railway in 1870 was a real boost for the town, which then became a popular English summer resort. Artists and writers were drawn to the area; through the work of Sir Merton Russell-Cotes, Bournemouth’s first museum and library were built.

In the early 20th century, the city grew even more in popularity and size, with the addition of theatres, cafés, two art deco cinemas and many more hotels.

During the Second World War, the coast was fortified in the fight, and large amounts of barbed wire and anti-tank obstacles were placed along the beaches for protection: it took more than two years to clear up the beaches when peace was achieved.

An in-depth look at Bournemouth

People from all over the world choose to settle in Bournemouth.

The city has a thriving youth culture, thanks to the large student population brought to the area by Bournemouth University.

Bournemouth is a large employer, attracting lots of young professionals to the area with jobs in finance, public service and tourism.

Types of properties in Bournemouth 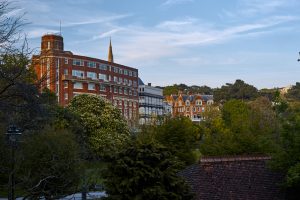 Properties in Bournemouth vary in style and period. As a major summer holiday venue, there’s a lot of construction in the area; you’ll always be able to find new developments there.

If you’re planning to rent in Bournemouth, you should expect to pay around £700pcm on average for a one-bedroom flat and between £800-1,200pcm for a two-bedroom property. 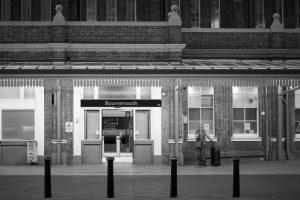 Bournemouth has a whole host of great transport options to get you wherever you need to go.

The city is also great for regular air travellers, with Bournemouth airport offering easy flights to the UK and Europe, including popular holiday destinations.

Bournemouth is also served by a range of convenient bus routes, as well as having good access by road to neighbouring southern cities.

This seaside city has plenty to offer when it comes to quick bites, fine dining and retail therapy.

Moon in the Square

The Moon in the Square is a popular Wetherspoons venue, based on the ideal pub as described by George Orwell, hence why it has ‘moon’ in its name. It serves traditional pub food, delicious real ales and pizza, all located in a historic building.

Turtle Bay is a fun Caribbean Restaurant, serving dishes for breakfast, lunch and dinner. It’s also great for a coffee break or happy hour, with cocktails and mocktails, including tropical juices and Caribbean rum.

Richmond Classics is a historical store founded in 1988. It’s a famous destination for innovative fashion; the shop has even been featured in various fashion magazines.

The Bay Tree is a charming local café with a cosy interior and a simple, tasty lunch menu. The service at the Bay Tree is really warm, helpful and inviting, perfect for a treat or catch up with friends and family. 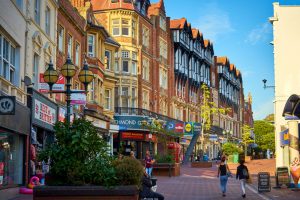 You’ll never be bored in Bournemouth, with plenty to see and do.

Bournemouth is a really lovely place to live, with a wide variety of open spaces and the sea in spitting distance.

If you’re dreaming of a home with a seaside view, then Bournemouth might be the perfect place for you; it’s time to start your property hunt.