A city of vitality and steeped in history, Edinburgh is unrivalled in culture and also a great place to live. It has countryside, hills and coastline close to its gateways and offers a great lifestyle that suits many people’s needs.

If you’re thinking about moving to Edinburgh, we’ve put together this guide that will help you taste the many flavours of this historic and joyous city.

Edinburgh is the capital of Scotland and is located in Lothian, on the southern shore of the Firth of Forth.

A brief history of Edinburgh

The oldest remains found in this area date back to the Mesolithic period, circa 8500 BC, which can be found around Arthur’s Seat and the Salisbury Crags – the hills in the eastern part of the city. The town was and is most famously known for the volcanic rock on which Edinburgh Castle stands. Originally named Castle Rock, it wasn’t until after the 7th century that the city supposedly attained the name “Edwin’s Fort”, referring to King Edwin of Northumbria, which later turned into Edinburgh.

The city has been home to and been visited by many royals, and the castle itself was Scotland’s chief royal castle throughout the Middle Ages. With the town starting to become overcrowded in the 1500s, it began expanding beyond the volcanic rock, with the creation of New Town – a residential area just south of the castle. Since 1437 Edinburgh has been the capital of Scotland and since 1998 some parliamentary powers have been devolved to the country, under the Scotland Act.

An in-depth look at Edinburgh

Edinburgh is Scotland’s second most populous city and has a large population of young adults between 20 and 30 years old. The city is a mix of cultures from around the globe, but you will also be sure to find some true Scots(wo)men there, too.

Types of property in Edinburgh

With both the New and Old Town to choose from, and numerous redevelopments and new residential areas, Edinburgh offers its inhabitants a wide range of properties.

Edinburgh is serviced by multiple bus routes, which run very frequently taking you to all corners of the city and beyond. Additionally, it has a tram system in the centre of town, which also connects to Edinburgh airport – Scotland’s busiest airport and the principal gateway into the country. From Waverley Train Station just off Princes Street – Edinburgh’s central shopping area – you’ll be able to catch North-, West- and South-bound trains using either the ScotRail or LNER train services. Haymarket station, located further in the west also offers many regular connections to major Scottish and English cities. 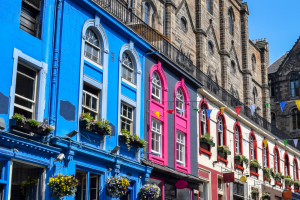 Princes Street and George Street are the main shopping areas in the city centre and are bursting with souvenir shops, clothing stores, as well as delicious cafes and restaurants.

Aizle, which in Scottish means ‘a burning coal’ was opened by Chef Stuart Ralston and the house supremo Krystal Goff in 2014. The restaurant offers fresh local and seasonal food in an informal setting. Though it may not sound like much, you can expect to be wow-ed by beautifully created dishes.

Fhior is the Gaelic for ‘true’ or ‘honest’ and is an ambitious restaurant that offers a surprise seven-course menu based on seasonal products for the best experience of Scottish food which reimagine time-honoured recipes for their ever-changing and evolving menu.

Located on the Grassmarket, with a clear view up to the castle, you need to make sure to stop off at Mary’s Milk Bar. Their fresh and daily changing flavours of ice cream will definitely keep you coming back for more.

The Sheep Heid is rumoured to be one of Scotland’s oldest pubs, established in 1360. It is believed that Mary Queen of Scots regularly went to the Sheep Heid centuries ago. Today the pub has a beautiful backyard beer garden to enjoy the summer sunshine. This stylish restaurant and bar also offers a great variety of seasonal favourites and classic pub food dishes.

Located in the centre of the Old Town, Grassmarket offers you beautiful upward views of the castle and a wide range of restaurants and shops. On weekends, merchants set up their stalls, and this bustling historic square truly comes alive with the mouth-watering smells of freshly cooked meals and independent, local shops selling second hands books and other knick-knacks.

Fancy trying some local brews? Then head over to Innis & Gunn Brewery Taproom, where you can try some very potent, freshly poured beer and enjoy a hearty pub meal alongside it. 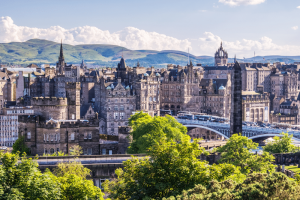 Edinburgh is known as a very sociable and green city. It is especially famous for its summer festivals, including the Edinburgh International Film Festival, and the Fringe Festival, which is the world’s largest annual international arts festival.

Edinburgh is a vibrant place to live and has so much to offer that this brief guide could never include it all. With plenty of museums, restaurants, bars, open green spaces and sporting activities, this city is a place where you can always find something new to do. So, if you are keen on culture, history and living in a multicultural and friendly capital, then it’s time to find a home in Edinburgh.